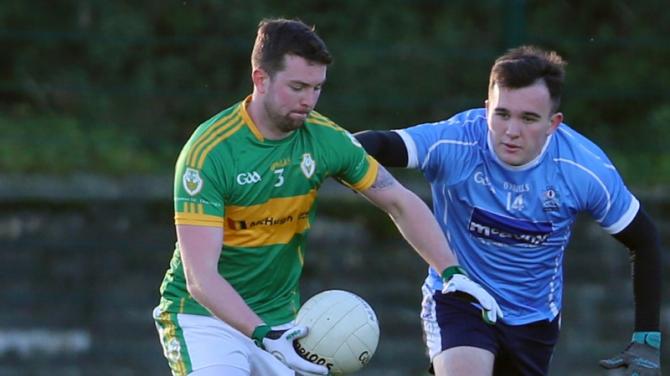 THE threat of relegation still looms for Aghyaran after a late sucker-punch goal rescued Dungannon in a dramatic Division One/Two Promotion/Relegation play-off at Killyclogher.

The St Davog’s appeared to have retained their Division One status as they headed into the dying moments with a three points lead, but Patrick Quinn’s strike sent the contest to a replay.

The sides will return to Killyclogher this Sunday to do it all again, with Aghyaran needing a win to avoid relegation and the Clarkes seeking to gain promotion from Division Two.

Roger Leonard’s goal late in the game appeared to have set the Tyrone men on their way to an important victory in a low-scoring encounter, but they were unable to hold on, and deep into injury-time, they were punished.

The game really burst into life in the second half, with all the drama one would expect from such a crucial sudden death encounter, following an uneventful first period.

Dungannon, with wind advantage, failed to avail of many opportunities they created during the opening half-hour, but the Aghyaran defence made life difficult for them, with Bernard Moss, Owen Devine and Conor McSorley getting through some valuable work.

The Clarkes eased ahead with early points from Patrick Molloy and Patrick Quinn, and they had built up a 0-2 to 0-0 lead by the tenth minute.

Ronan McNamee got through a lot of work around midfield, as well as dropping back to put in some effective challenges,  helping  them to withstand a sustained spell of pressure, and they almost had a goal when Patrick Martin broke through to fire in a shot, but he was denied by a fine save from Daire Martin.

Aghyaran had to work hard to carve out scoring opportunities, coming up against well organised defensive figures in Tiernan Morgan, David Walsh and Ciaran Barker, with Mark McKearney taking every opportunity he could find to launch attacks from deep.

It wasn’t until the 25th minute that the St Davog’s opened their account, with Ronan McHugh slotting over a point to get their challenge going.

And with the strong wind making life particularly difficult, they were grateful for the difficulty their opponents were experiencing at the other end, as the Clarkes struggled to get scores.

The men from O’Neill Park hit six wides in the first half, some from very scoreable positions, and they had to wait until the 28th minute for their third score, a neat point from Mattie Walsh.

But that was quickly cancelled out by another McHugh effort, and at the end of a first half that produced only five scores, Dungannon led by 0-3 to 0-2.

Aghyaran were well placed as they came out for the second half to play with the wind in their favour, but the opening stages were evenly contested, with substitute Conor McKee making his mark on the game almost immediately with a fine point, but that was cancelled out by another well worked McHugh effort.

If there was little to excite the crowd in the opening 45 minutes, then the final quarter more than made up for the lack of incident.

A series of goalmouth incidents saw the drama increase several notches, with Roger Leonard firing in a shot which was saved on the goal-line by Christopher Bullock.

Paddy McNulty also had a shot on goal for the St Davog’s, but he was denied as well by some last gasp defending, and as play swung from end to end, chances started to open up for Dungannon as well.

Walsh got on the end of a sweeping move, but he palmed his effort just wide and a golden opportunity was lost.

And it was Aghyaran who struck for a vital goal ten minutes from full-time. Paddy McNulty was heavily involved in the build-up, and it was Leonard who got in to drill his shot to the net past Daire Martin, finally giving them a slender advantage.

Straight from the kick-out, Aghyaran went back on the attack, and Ronan McHugh slotted over his fourth point of the afternoon to open out a three points advantage.

Nevertheless, they responded strongly, and points from Kiefer Morgan and Patrick Quinn kept them very much in touch as the final whistle approached.

Aghyaran lost ace attacker McHugh due to injury, but they continued to pose a serious offensive threat

Goalkeeper Benny Gallen, from a free, and substitute Brian Penrose were both on target as they went ahead by 1-7 to 0-6 ahead four minutes into the nine minutes of added time.

But Conor McKee brought Dungannon back into it with a point, and it was Quinn who popped up to grab the crucial goal that brought them level.