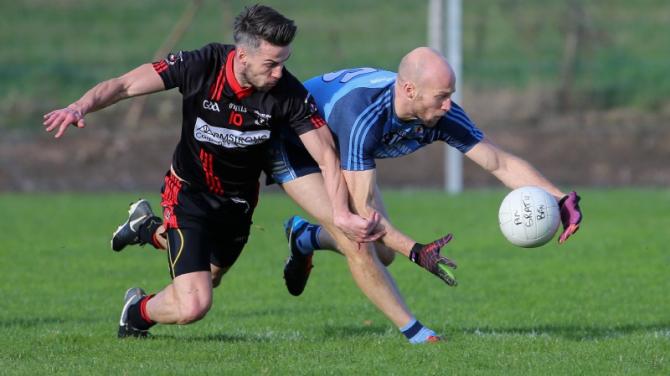 LCC Intermediate Football Championship finalists Tattyreagh hosted Strabane Sigersons at the weekend with the local side securing a 1-15 win to 1-05 at Darcy Park.

The Tyrone All County League (Division Two) clash proved to be a much-needed win for the relegation threatened Strabane side who used Tattyreagh’s upcoming championship decider against Augher to their advantage. The home side unsurprisingly fielded a depleted side as they prepare for their final bout.

The first half was keenly contested with Strabane running in with a 0-9 lead to Tattyreagh’s 0-3.

As the teams took to the pitch for the second half Strabane continued their fine scoring form with star man and corner forward, Danny McBride, kicking over the bar.

Tattyreagh put up a fight and were awarded a penalty midway through the half which Keelan McDonagh duly placed in the back of the net.

Not to be outdone, Strabane hit back minutes later with a goal of their own via Aran McGowan. The visitors also increased their lead with a haul of unanswered points.

The home side refused to lie down and knocked over two late scores before Strabane replied with a final brace of points through Haydn McNamee to seal the all important win.

With only one round of fixtures remaining, Strabane face an uphill task to avoid being relegated to junior level. For Tattyreagh, they face the tantalising prospect of senior football next season should they defeat their Augher opponents.