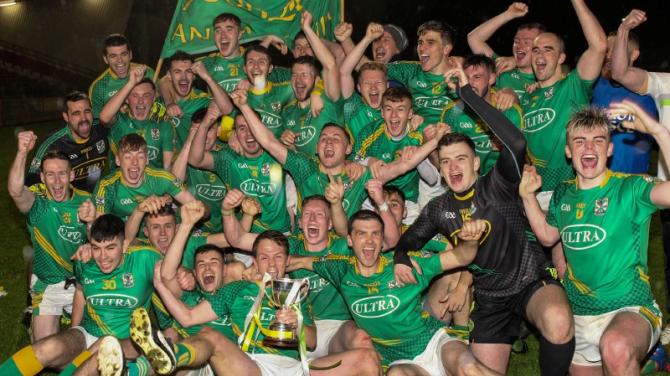 NEWTOWNSTEWART’S first half scoring blitz propelled them to victory in the LCC Tyrone Junior Football Championship final as they survived late Beragh fightback to take the title.

There were joyous scenes at Healy Park as fans and players celebrated a momentous win which lifts the club into Division Two and sets up an opportunity to go on and compete for an Ulster title.

Eoin Donnelly scored the first half goal that set the St Eugene’s on their way, while Declan Devine’s penalty save also made a huge contribution, and the leadership shown by midfielder Kevin Gallagher helped get them over the line.

“It’s fantastic, it’s unbelievable. We knew the fight was in the team there today,” said Newtownstewart manager Martin McNulty.

“We knew we had a big task against Beragh, a club with a fantastic tradition, great management, great club, and we knew that it was going to take one of our best performances.

“I know it wasn’t spectacular, but the grit and heart that the boys showed from start to finish, including injuries and black cards. The bench was stretched, but everybody that went on did a job.”

The triumph has come as a major boost to a club that has had a difficult year, with its grounds badly damaged by flooding.

“The club in Newtown, similar to Beragh, with the floods and all the adversity that went on, it’s great to bring the trophy back,” said McNulty.

“There’s a good buzz about Newtown, and the place now can look forward to a few nights partying. We’ll take a week off and then we’ll think about Ulster.”

A strong opening quarter saw Newtownstewart race into a five points lead, laying a solid foundation for what was to come.

“So in the first half, we laid the foundation to win the match. We were hanging on at the end, and with the injuries we got, we were struggling.

And in the face of a furious Beragh fightback in the second half, Newtown defended with resilience.

“Beragh, with their typical tradition, possession football, off the shoulder, and Enda (Kilpatrick, manager) brings that in spades. And they were fantastic at times, but what we did do was at the last line of defence, there were great tackles, interceptions

“And then we broke out, held the ball and clipped a few scores. But Beragh threw everything at us, what a final, and just fortunately we were on the right side of it.”

McNulty paid tribute to the contribution of goalkeeper Declan Devine, who denied Martin Rodgers with a superb penalty save in the first half.

“That’s what Deccy can do, he’s a great shot-stopper, fantastic. He has been with the team and the club a long time, but he has got his rewards, a medal today.

“The stop itself lifted the whole team, galvanised the defence, and we just took it on from there, but by bit.

McNulty added: “We looked at the start of the year to get past the first round of the Tyrone Championship and we ended up going to the final and winning it.

“We’ll take a few days off and then we’ll think what we want to do. We’ve achieved our target and anything now is a bonus.”

Newtownstewart wasted no time in getting to the pace of the game, with Aidan McSorley tapping over a free in the opening minute, and with Kevin Gallagher an imperious presence at midfield, they continued to attack with purpose.

Michael Corless capped a surging run with a point, and Ryan Mayse came off the bench for the injured Aidan McSorley to score with his first touch.

Beragh had a golden opportunity to get themselves right back in it when Aodhan McNamee felled Tiarnan McCrystal with a sliding tackle, and referee Steven Campbell awarded a penalty.

But Martin Rodgers had his kick saved by Declan Devine and the ninth minute chance was lost.

Niall Owens won the free that Rodgers converted for the Red Knights’ opening score in the 12th minute, but the St Eugene’s were immediately back on the attack, and hunting for scores.

Niall Mayse had a shot finger-tipped over the bar by goalkeeper Dan McSorley, and Ryan Mayse steered over his second, before Kevin Gallagher shot the north Tyrone men into a 0-6 to 0-1 lead.

As Beragh countered, Oisin Donnelly capped a surging run with a fine point, with Sean McMahon and Tiarnan McCrystal making ground along the flanks.

But they suffered a setback in the 22nd minute when Ryan Mayse sent Eoin Donnelly in for a brilliantly taken goal.

Gallagher tagged on a point, and Newtown led by eight, but Rodgers buried a shot in the back of the net on the stroke of half-time, and Beragh were right back in it.

Newtown led by 1-7 to 1-3 at the break, and added five more points in the opening ten minutes of the second half, through Niall Mayse and Ryan Mayse (2), Gallagher and Brendan Boyle to restore the eight points cushion.

But the final 20 minutes belonged to a Beragh side that threw everything into attack.

Rodgers and Niall Owens fired over points, and Aaron Owens had a shot well saved by ‘keeper Devine.

Johnny Woods came off the bench to slot over a couple of neat scores, and Newtownstewart were unable to get out of their own half.

Late scores from Rodgers and Tiarnan McCrystal set up a tight finish, and just a point separated the sides when the final whistle signalled joy for Newtown.