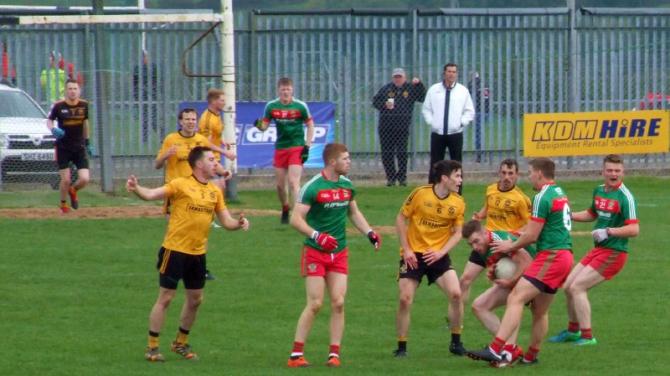 HAVING accounted for Aghaloo in the first round of the Intermediate Championship last Friday night, the Owen Roes senior team travelled to Pomeroy to meet Augher in the quarter-final on Saturday.

With two minutes on the clock the Roes were to be first out of the block on the scoresheet when Cathal McShane pointed form a free. Augher replied before McShane restored the lead from another free on nine minutes.

With the wind in their faces, the North Tyrone side were still applying themselves well to the game but for some wayward passing and timely interceptions from their opponents which saw them struggle to impose themselves scores-wise.

Augher too had their own problems in the opening quarter with wayward shooting but once they got over their initial wastefulness it was they who were to impose their gameplan on proceedings. Three pointed frees from Augher's Darren Kavanagh, two from play Darragh Donnelly and one from full-forward Aidan Cassidy pushed the St Macartan's men into a six point lead and it wasn't until the 26th that Conor O'Neill registered the next Roes score, this time from play.

Augher held their resolve and with two more points from Liam Connolly and Donnelly went into the Pomeroy clubhouse with a commanding eight point lead.

Augher started the second half as they finished the first with two points from Martin McElhatton and Cassidy within the first minute. The Roes’ support sensed more of the same for the remainder of the second half but the players had other ideas.

Oisin Dooher was barely on the field when he picked out fellow sub Niall McAleer who promptly beat Christopher Holland in the Augher nets. Kavanagh pointed again from a free but points for the Leckpatrick side from McShane (two frees) and substitute Ryan Mc Shane (one from play and one from a free) left three points in it with ten minutes of normal time to play.

Kavanagh pointed again from a free. At the other end, Ryan McShane, who was imposing himself well all over the field, dropped a sideline ball into the Augher square.with two cracks at goal coming off in the scramble for possession and the fight to to clear, the resulting clearance going out for a 45.

The 45 drifted wide and Augher capitalized on the kickout with point from midfielder, Eoghain Keenan. It was now a five point game with 27 minutes gone and unfortunate shooting from the Roes were keeping them from closing the gap.

Ryan McShane picked off a goal on 32 minutes but referee Shane Dorrity had already checked his watch and within seconds of the kickout blew it up, leaving the Owen Roes to fall to a two point defeat.

The wind, the wides, a more efficient Augher side, an established free taker in Darren Kavanagh picking off half a dozen frees, a spirited second half fightback by Owen Roes all made it an interesting game that could have went either way into the dying stages.

Now it's back to the league with two away games remaining against Augher and league winners Eglish so still some football to play in 2018 for the reserves and seniors and a possible play-off spot up for grabs.