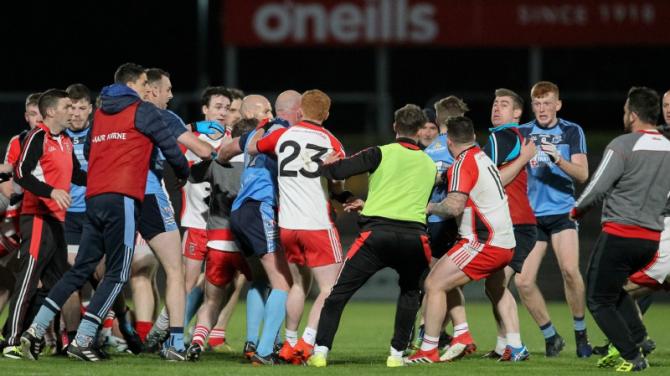 STRABANE’S gutsy comeback fell just short as they lost out in an incident-packed LCC Intermediate Championship first round tie at Healy Park, with Stewartstown producing a strong surge in extra-time to win by 1-19 to 2-13

An outbreak of violence marred this game right at the end of normal time, after the Sigersons had come back from six points behind to go level. Large numbers of players from both sides, as well as substitutes, were involved in an unseemly punch-up, but the game was completed in an orderly manner, after the brawl was brought under control.

Ruairi Gormley was one of Strabane’s stars on the night, and along with Brian Breslin and Danny McBride, played a big part in his side’s revival at a time when they looked destined for a comprehensive defeat. His high fielding helped Strabane gain territorial advantage in the early stages, but they were unable to turn possession into scores.

It was the Harps who opened the scoring with a Dan Lowe free in the fourth minute, and in the 10th minute, they got in for a goal. Full forward James Kelly created the opening for Lowe to jink past three defenders and plant his shot in the bottom corner of James O’Reilly’s net. Lowe almost had a second goal a short time later, but his soccer-style effort came back off the butt of a post.

Strabane reverted to a route one approach, and with significant success. Breslin’s high ball punched to the net by Martin Mongan for their first score in the 14th minute.

And they went level when Warner Mullan converted a free at the end of the opening quarter. Both sides adopted a defensive approach, but Strabane were effective on the breakaway, and they almost grabbed a second goal when Danny McBride sent in a high ball, which was fielded by Gormley. His shot came back off a post, and as he had a second go from the rebound, goalkeeper Greg Kelly pulled off a brilliant save.

Stewartstown sent over three points late in the half, through Lowe, Conor Quinn, and Macauley Quinn, to go in at the break with a 1-4 to 1-1 lead.

And they started the second half strongly as well, with another three-point salvo. Lowe squeezed over a brilliant score from a tight angle, and won the frees that Gareth Devlin and Lowe converted.

Strabane needed to get out of their defensive shell and they did start to run at the Stewartstown defence. Gormley was a driving force, and after he steered a 45 metre free between the posts, Mullan slotted a penalty to the net after Dylan Arnold had been fouled.

Mullan followed up with a couple of frees to bring the sides level by the beginning of the final quarter, but Macauley Quinn put the Harps back in front.

However, with Breslin, Gormley and Danny McBride stepping up their game, Strabane continued to press, and scores from Breslin, McBride and two from Gormley had them ahead by three going into the final five minutes.

Stewartstown fought back again, and despite the straight red card dismissal of centre forward Gareth Devlin, they drew level with two stoppage time frees from Lowe.

Ugly scenes marked the end of normal time, with several players from both sides, including subs, involved in an unseemly brawl. When order was restored, referee Fergal Ward issued red cards to two Strabane players and one from Stewartstown.

They finished deadlocked on 2-9 to 1-12, and Stewartstown led by a point halfway through extra-time. It was the Harps who had more energy in reserve, and they pushed for home with scores from Peter Armour, Macauley Quinn and Owen Coyle late on.