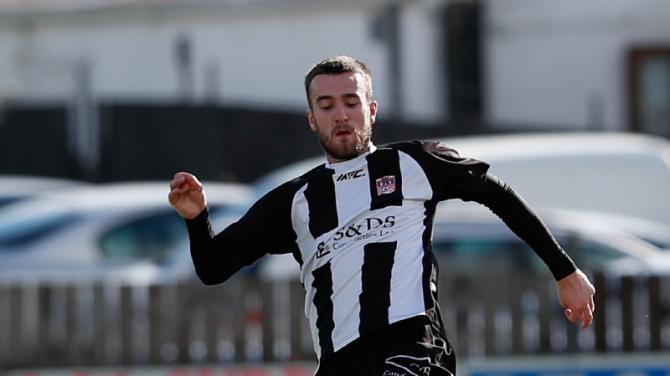 TOMMY Canning admits the departure of defender Kieran Farren to Premiership outfit, Coleraine, is a huge loss ahead of the new season.

The versatile 21-year-old has signed for the Bannsiders on a two-year deal.

The defender, who has been training and appearing for Oran Kearney's side over the last six weeks, joins after a spell at Bluefin Sport Championship side Dergview.

Farren started his career playing underage football for Derry City before moving onto Finn Harps in 2019.

After a year at Finn Park, he moved to Dergview where he impressed at both centre-back and right-back.

Tommy Canning had this to say regarding losing the versatile defender.

“It's a mixed feeling as Kieran is a huge loss for Dergview but it's also a great opportunity for him to sign with Coleraine," he said.

"It's an opportunity he deserves and has earned with his performance levels in the Championship last season.

"His attitude, commitment and quality were clear last season and it's no coincidence he has received this opportunity on the back of it.

"It shows that the Championship is a great league for players to use as a stepping stone to the Premiership and Dergview FC have helped Kieran in that regard and can help other players achieve that aim.

"I wish Kieran all the very best in the next step of his football journey."

Farren says he is delighted to have sealed the move and also spoke of his ambitions of bridging the gap from Championship to the top flight and cementing his place in the squad.

Kearney was full of praise for Farren’s attitude and application during his time on trial and believes he more than deserves his two-year deal.

“He certainly has impressed during training and matches,” he said.

“When you’re looking for quality players, especially in the Championship, it can be impossible to watch them as we both kick-off at the same time.

“The rationale behind the trial move was to watch Kieran with my own eyes and to be fair to him, he was up for that and his attitude and application since we’ve came back for pre-season has been very good.

“He is only 21-years-old, he has a great future ahead of him and possesses the attributes that will help us moving forward."