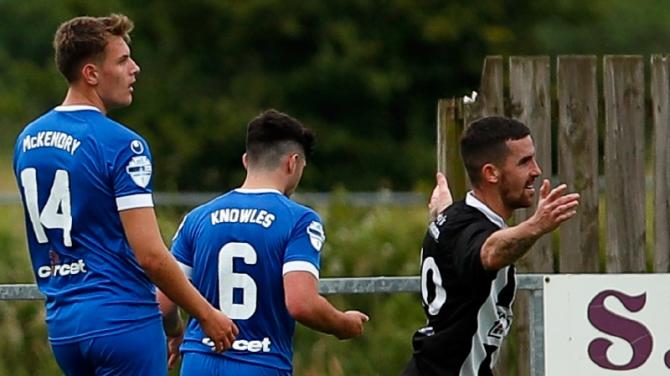 Tommy Canning's side entertained Swifts at Darragh Park as part of a packed schedule of friendly fixtures ahead of the Lough 41 Championship season opener against Newington at Solitude on August 13.

McCallion, who signed from Derry City, made his debut in Saturday's 2-1 defeat.

Newtownstewart man, Ryan Mayse, opened the scoring for the visitors with McCallion restoring parity racing on to a Sean McCarron pass and firing past the Swifts keeper.

It was an entertaining game, with chances for both sides but it was a quickly taken free kick - which found Marc Walsh - that sealed the win for Dungannon.

Both managers were pleased with the run out for their teams and no doubt the Darragh Park faithful will be keen to see more from McCallion as the season gets underway.

The talented marksman put pen to paper following Saturday's game and Canning is delighted to have secured his services.

"Calvin has agreed to sign with Dergview for 2022/23 season and I'm absolutely delighted to get this deal done," he said.

"Calvin is a great addition to our squad and I've no doubt he will make his mark on Championship this season.

"An experienced player who leads the line well and is clinical in front of goal.”

The striker is also relishing the challenges for the season ahead.

"Delighted to have finally signed for Dergview and really looking forward to the season ahead," he said.