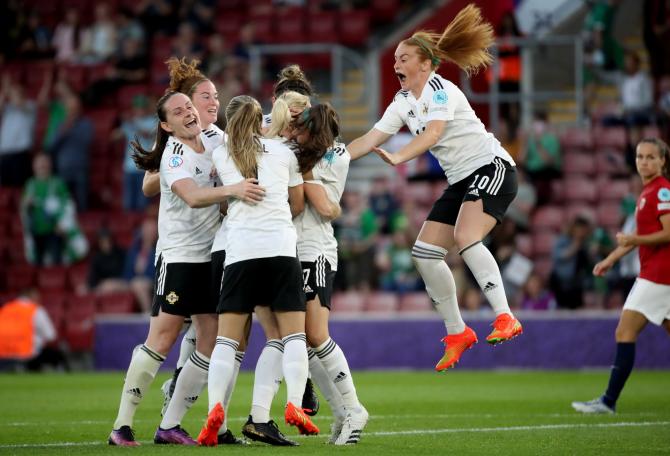 Northern Ireland suffered defeat in their opening game of Euro 2022 – but made history with their first ever goal in the tournament.

A spirited second half display was sparked by a Julie Nelson goal on 49 minutes, but in terms of the result all of the damage had been done in the first half.

The travelling members of the Green and White Army certainly made their voices heard throughout the game at Southampton’s St Mary’s stadium. Not even three goals in the first half could silence the Northern Ireland fans.

Julie Blakstad broke the deadlock with just 10 minutes on the clock. The Manchester City striker scored with a tidy finish when past Jackie Burns.

Norway bagged a second just three minutes later when Frieda Mannum closed down Chloe McCarron and found Ada Hegerberg. She squared the ball back to Mannum who tapped into an empty net.

The third goal came from the penalty spot when Nadene Caldwell was punished for a hand ball. Caroline Graham Hansen stepped up and while Burns got a hand to her spot kick, she couldn’t keep the ball out of the net.

Kenny Shields replaced Caldwell at half time with Northern Ireland’s captain, Marissa Callaghan. Northern Ireland responded almost immediately when a corner kick was volleyed back across goal, with Nelson waiting at the back post to head home. History made.

Hopes of a comeback were shortlived, however, and within five minutes of that goal Norway had their fourth. Chelsea’s Guro Reiten curled a low free kick around the Northern Ireland wall and into the bottom corner of the net.

Northern Ireland’s next game is on Tuesday when they play Austria, who lost 1-0 to England in Wednesday night’s opening game.