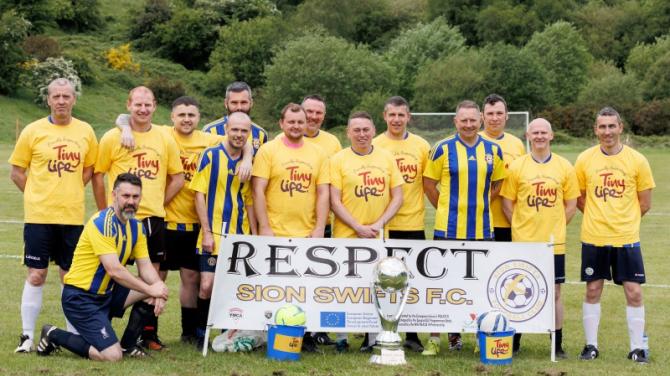 A CHARITY memorial football tournament in Sion Mills has raised £1,300.

Held at The Brae, over 130 players took to the field as part of the Alfie Crompton Memorial Blitz organised by Sion Swifts.

The club's youth teams took part in a series of match-ups ahead of the main event featuring senior and past players.

A club spokesperson said: "It was a great turnout considering a full programme of Derry and District fixtures and the seniors playing a final.

"Due to the Brae not being available for several years and then the Covid break this was the first time back in the Brae.

"The game was in memory of Alfie Crompton who give so much time to football in the village and used to keep the pitches in great shape.

"It is great to see Alfie’s family heavily involved in the club at youth level, men's and ladies.

"A lot of work was put into the event by a lot of people in particular Deirdre.

"Thanks to the Recreation Club for their hospitality, to the fishermen for a substantial donation, to the Saturday Morning League and Mourne Celtic for the gate donation and to anyone else involved in any way."

The Crompton family have extended their thanks to everyone who took part on the day, assisted with organising the event and to the many local business who sponsored raffle prizes.