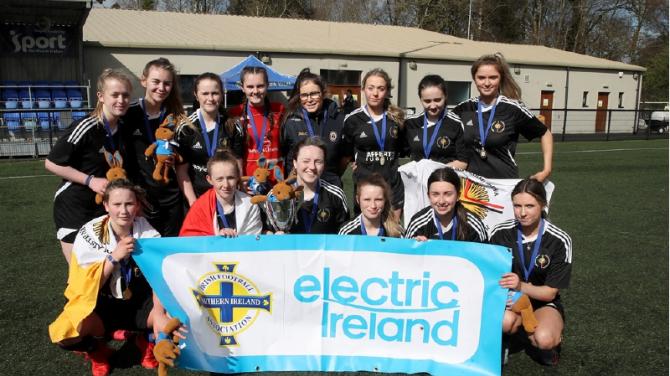 Mill Meadow in Castledawson was the venue for two action-packed finals in the U14 junior and U18 senior competitions.

In the junior contest Dominican, coached by Jessica Foy, and Holy Cross, coached by Gerald Boyle, battled for everything and neither side was prepared to give an inch.

Despite some excellent attacking play from both teams, their respective defences were on top.

The score stood at 0-0 at half-time and full-time.

The game was cagey in extra time, however Dominican managed to grab the lead towards the end of the first period through Aiobheann Monaghan.

Holy Cross battled away as they searched for an equaliser but they were continuously halted by the Dominican defence and in particular Emma Brown, who was imperious at the back and who also set up the first goal.

Anna Walsh extended Dominican College’s lead in the second period of extra time and they were deservedly crowned national junior champions in their debut season in the competition.

Boyle then had to refocus as his senior team took on cup holders Mercy College in the senior decider at the home of Moyola Park FC.

It was just as intense as the first game and it produced plenty of goals for the bumper crowd to enjoy.

Back came Holy Cross. They had what they thought was a goal ruled out before they equalised thanks to a peach of a strike from Clara Quigg.

After the break Ciara McAleer struck to give Holy Cross the lead. Mercy, coached by Seadna Billings, soaked up plenty of pressure before grabbing an equaliser late on. Katie Markey pounced on a loose ball inside the area to steer it into the net.

There was still time for more drama in the 90 minutes. Holy Cross managed to put the ball in the net once again, however the effort was ruled out for offside.

The game then went into extra time. Holy Cross pushed forward but Mercy went toe to toe with them.

However, just when it looked like penalties might be on the cards, Crystal Crossan had other ideas.

In the last minute of added time she produced a bullet header to secure a 3-2 victory for Holy Cross.

Northern Ireland internationals Sam Kelly, Rachel McLaren and Maddie Harvey-Clifford were on hand to present the medals and trophies to the winning sides.

After the matches Damian McLaughlin, Schools and Futsal officer with the Irish FA Foundation, said: “It was an incredible day for girls’ football with all four sides playing beautiful football.

"We couldn’t have had two tighter finals, with all the teams involved representing their schools to the highest standard.

“It was a shame we had to have two losing sides but ultimately days like these are what grows the game and brings more and more eyes to the amazing development of the women’s game in Northern Ireland.”