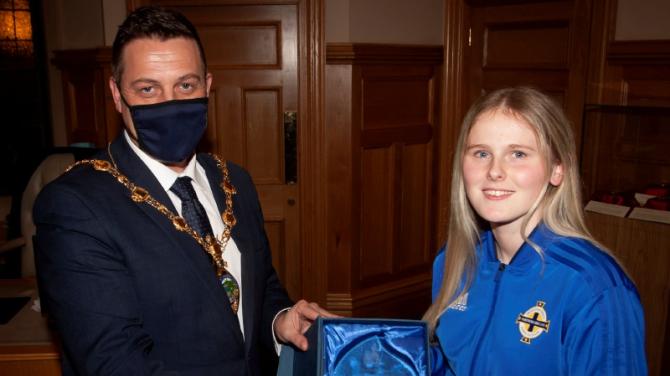 SION Swifts Ladies and Girls FC's Cora Chambers has received a special award in recognition of her success in being called up to the Northern Ireland senior women’s full-time camp to develop ahead of the heading to the Euro 22.

Cora - who recently turned 18 - joined her team mates in camp at Newforge Sports Complex in Belfast last month in preparation for the prestigious tournament.

The creation of the camp means players in Kenny Shiels’ squad who do not play the game professionally in England or Scotland will become full-time players in the run-up to the tournament, which is being staged in England in July.

Mayor Warke said: "It was a pleasure to have Cora, her family and her friends visit the Guildhall so we could mark her fantastic achievement of being called up to Kenny Shiels' squad.

"At just 18 years of age it really is a testament to Cora's talent that she is representing the city and also Sion Swifts in a highly competitive squad of the very best footballers in Northern Ireland.

"Cora is also the only player from the North West in the squad so I'm delighted that we have a player there who is representing the great set-up and coaching that we have here in our council area, which is helping further develop women's football.

"A warm congratulations once again to Cora and I hope to see her on the pitch this summer doing what she does best - scoring goals!"

A spokesperson for Swifts siad they were delighted to see the talented teenager recognised.

"It is brilliant to see such great recognition at all levels for our local women in sport as they push for higher levels in their chosen sports, the spokesperson added.