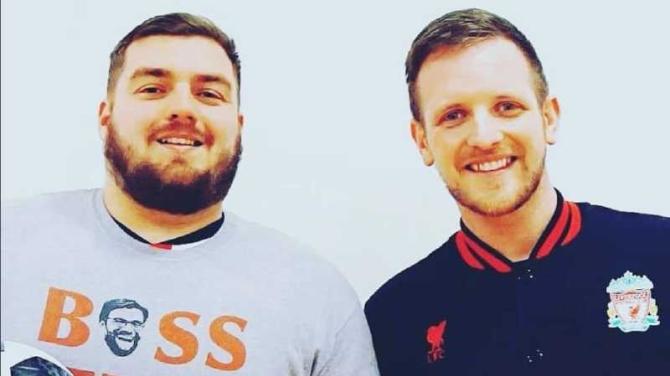 A STRABANE man who produces a weekly podcast on his beloved Liverpool FC has managed to bag himself a huge interview with a former European Cup winner.

It has captured the imaginations of Liverpool fans here, there and everywhere - and it's not difficult to see why.

Earlier this year, the guys had the privilege of interviewing former Liverpool player, Howard Gayle, who was the first black player to ever play for the club and was a member of the side that won the European Cup in 1981.

Former goalkeeper Chris Kirkland also made time for a chat earlier this year.

And last year, Neil Mellor, who played for the club between 2002 and 2006, shared his thoughts on the podcast.

Perhaps the biggest name to appear on the podcast, however, was Alan Kennedy who took time out of his busy schedule to speak to them recently.

Kennedy was a great attacking full-back who had a knack of scoring vital goals that helped the Reds clinch silverware.

He scored the winning goal in Paris against Real Madrid in the 1981 European Cup final. And no one can ever fail to remember the look on his face when he celebrated the deciding spot-kick in Rome 1984.

Kennedy was also a member of the 1981 Liverpool team that beat West Ham in the League Cup.

His astonishing record of scoring in big games continued as he struck a second-half equaliser against Manchester United in the 1983 League Cup final.

After leaving Anfield, Kennedy had brief spells in Belgium, Denmark and Sweden and also with Hartlepool and Wrexham in the lower divisions of the Football League before continuing to play non-league football until he had passed his 40th birthday.

“It was just unbelievable talking to Alan Kennedy,” beamed Shaun.

“A mutual friend sorted it for us and Alan said it wasn’t a problem.

“The interview was amazing. He just couldn’t have done enough for us. He could have sat with us for another hour chatting!

“He was talking about the modern day players and he loves Virgil Van Dijk.

“He’s from Sunderland and played for Newcastle United so he was telling us about that. And then to get the move to Liverpool was a dream come true.

“He was such a gentleman.”

Kennedy now keeps active playing a slower form of the game - walking football - and he has even invited Shaun over to Liverpool to take part!

Over 700 people have tuned into the programme and Shaun is delighted with the progress the podcast is making.

“It’s just going from strength to strength,” he said.

Now that a number of superstars have appeared on the podcast, Shaun is hoping he can attract even more big names.

“These ex-professionals don’t struggle to hold a conversation because they have just so many stories to tell,” continued Shaun.

“You just let them talk - there’s nothing an awful lot to it!

“My dream is to get Jamie Carragher on, you just never know.

“If someone told me three years ago when we first set up the podcast that we would get five ex-Liverpool players on I would have laughed.”