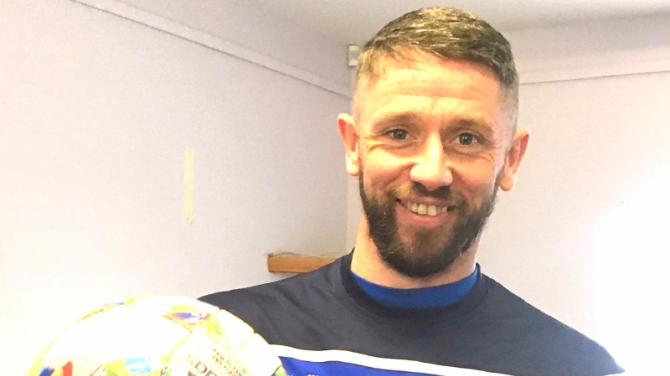 FOUR goals from player-manager Rory Patterson helped Strabane Athletic make it three wins from three under his leadership, as the local side thrashed Carrick Rangers Reserves 6-1 in the Intermediate Cup on Saturday.

The former Northern Ireland international was on fire, tearing the young Carrick defence apart with a ruthless display of finishing.

He scored four but heavens only knows how many Patterson could have ended up with had he not replaced himself towards the beginning of the second half.

Speaking to the Strabane Weekly News, Patterson was more interested in his side’s display than any personal plaudits.

“It was a great team performance,” he said.

“Obviously it was disappointing the match was postponed the week before, so the boys were chomping at the bit to get playing.

“After the disappointment of the Irish Cup exit, we wouldn’t to get some kind of cup run going.

“It’s cup football - there are no second chances - and we’ve got off to a bad start in the League Cup.

“Some of our players can’t play in certain cups, so it’s all about trying to spread the games across the squad and get everyone up to match fitness.”

“It’s good that my goals can help out, and I think getting a couple of goals early took the pressure off,” he added.

“But I’m just happy if we go out on a Saturday and win. The personal stuff can sit to one side.

“On the day, in every department - passing, in defence and in midfield, getting the ball back - it all just clicked for us.”

Looking at the bigger picture, Patterson is happy with his side’s recent form ahead of the start of the Intermediate League, which kicks off in mid-November.

“Since I’ve come in, the boys have been brilliant. We’re getting great numbers in training and everyone is working really hard. Everyone is buying into it and looking forward to the next game.

“Things we have been working on are coming off on the Saturday.

“There is a bit of belief coming from the individuals and they’re now realising how good they are.”

Patterson is keeping himself “in good order” but admits it’s difficult to juggle management while playing.

“It’s tough to see what everyone is doing on the pitch and how we’re playing as a team, and there will be games when I’ll be doing it on the sidelines for my own development,” he said.

“I need to see it from the sidelines sometimes.

“If I can get the right balance, that’s important, but I have a good support network and some experience in the backroom staff.

“But obviously we’re all delighted with how it’s going at the moment.”