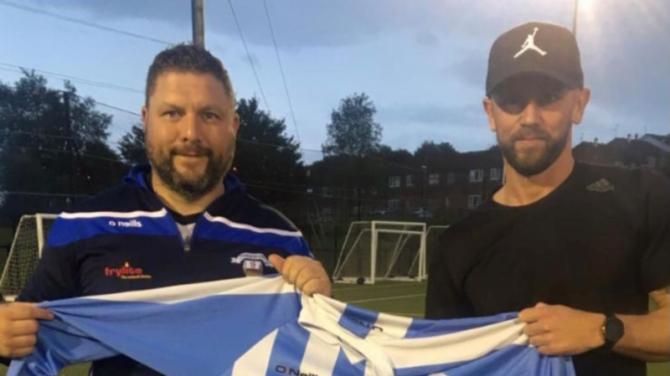 These are just some of the top teams new Strabane Athletic boss Rory Donnelly has represented during a long and successful playing career - and the 37-year-old believes he can take a little of his former managers as he moves into the dugout.

The former NI international has been named the successor to Marty McCann, who has left the club to take up a coaching role at Cliftonville.

Patterson - who won five caps between 2010 and 2014 for his country - was persuaded to join Strabane Athletic by former manager Eamon Curry back in August - as a player, of course.

But how quickly things can change.

Curry announced his resignation only weeks later due to work commitments.

McCann was promoted from within to the top role but when Cliftonville came calling, it was a job he couldn’t turn down.

Club chairman Seamus McElroy didn’t have too far to look for his replacement - and Patterson didn’t take too long to accept the offer.

He has no intention of calling quits on his playing career either, combining his on-field duties with the pressure of management.

Management may be a completely new concept for Patterson, but he has plenty of experience in the game, and having worked under countless managers, believes he is well equipped for the role.

“I have worked under a lot of coaches and managers over the years, so I’ll take a little bit from everyone,” said Patterson.

“It sounds like a cliche from players who are taking their first role in management - but I like to learn.

“It’s not like I’m going into this job with the approach: ‘it’s all going to be my way’.

“I will take a bit from everyone I’ve worked under, whether that is good or bad.

“It’s all about the experience and knowledge I’ve picked up along the way.”

He paid particular tribute to former Strabane boss McCann, who he hailed as the ‘one of the best coaches’ he has worked under.

“I didn’t think it was going to be long before an Irish League team came looking for him,” said Patterson.

“Once he got the call from Cliftonville, it wasn’t a big shock - not for me anyway.

“Marty is an A1 coach; his sessions are great, they’re fun and great for the young lads. I can’t say enough good stuff about him.

“He deserves this job and I wish him all the best.”

Patterson will be the fourth different manager in as many months at the club - and, ultimately, his first job will be to provide stability.

“It sounds bad when you say it like that, but it’s not like people are leaving because they don’t like it at the club,” said Patterson.

It is undoubtedly an exciting time for Strabane Athletic, considering all of the work that has gone on off the field.

If the club can repeat their NI Intermediate League heroics of 2019 there’s every chance they will progress to a higher standard of football, thanks to their new stand.

“There’s a good blend at the club - it’s just about trying to tweak a couple of things,” he said.

“It’s about getting the right mentality moving forward, that we do want to climb the leagues.

“Strabane won the league a couple of years ago, and while it was a great achievement, let’s be honest: they didn’t go up because they didn’t have the facilities in place.

“It’s now on us to take that next step and replicate winning the title to try to get promotion into that higher league.”

Patterson has a couple of weeks to prepare his squad for the start of the NI Intermediate League campaign.

This Saturday sees the club take on Newtowne in the League Cup.

“We still have a couple of weeks’ work to do,” said Patterson.