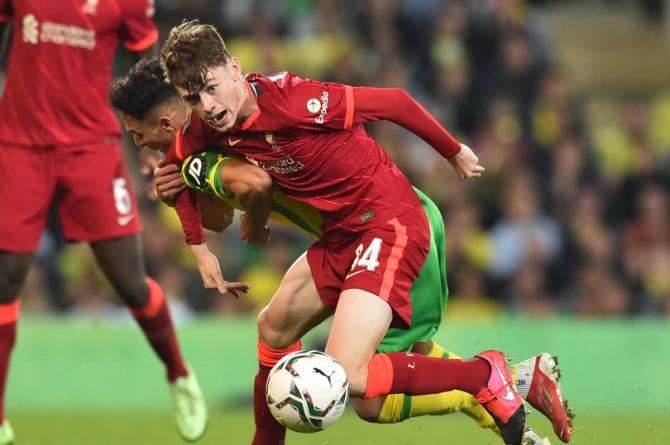 CASTLEDERG'S Conor Bradley made history on Tuesday night as he became the first Northern Irishman to start for Liverpool since Sammy Smyth in 1954.

The 18-year-old made an impressive showing on his debut as he helped Jurgen Klopp's side to a 3-0 win over Norwich in the Carabao Cup third round clash.

It has been a rapid rise to fame for the youngster, who began his fledging career at his local club St Patrick's before joining Dungannon Swifts.

His talent was soon spotted by Liverpool, who signed him in the summer of 2019.

After starring in the club's youth system, Bradley was called into the first team during the summer and made an appearance off the bench against German side Stuttgart in July.

And last night, with Trent Alexander-Arnold and Neco Williams unavailable, Klopp put faith in the youngster by starting him at right-back.

Although he conceded a first-half penalty, which goalkeeper Caoimhin Kelleher saved, Bradley recovered and went on to have more touches than anyone else on the pitch with 95.

His performance did not go unnoticed by the Liverpool boss, who said: “We saw Conor Bradley and I heard before the game he was the first Northern Irish player (to play a competitive game for Liverpool) since 1954. It sounds too long to be honest.

"If somebody would have told me that before, I would have brought him (in) probably earlier.

"It is a great, great thing and he played a super game."