Promotion is only the start for Strabane Athletic Ladies, says ambitious boss 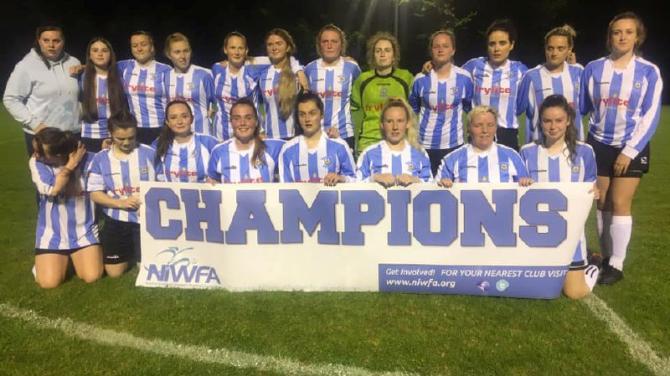 PROMOTION from the Northern Ireland Women’s Football Association Division 5 is only the start for Strabane Athletic Ladies.

That’s the message of hope from boss Gigs Connolly, who said he was tremendously proud of his players’ achievements. They won the league after an emphatic 8-2 victory over Ballymoney Ladies on Monday night.

Some feat considering the club was only formed in February.

And they did it in some style. Trailing by two goals and seemingly heading towards disappointment, Athletic produced a remarkable comeback, blowing the opposition out of the water with eight goals.

“At the start of the season, we wanted to give players an opportunity who may not have played football before,” explained Gigs, who is the manager alongside his nephew Paul.

“Our main aim was to give them regular game time over the next few seasons.

“We also put the feelers out to players who may not have been playing enough for other teams.

“But once we got the squad together, our immediate aim was to get promotion, although we weren’t expecting it.

“As the season progressed, we realised promotion really was a realistic goal.

“Some people feel that Division 5 is a bad standard, but there are three other really good teams - Lisburn, Craigavon and Newhill.

“For Division 5, I doubt very much that there has been four such strong teams.”

What makes their title win even more impressive is that Strabane somehow managed to play four games in just 10 days.

They started perfectly, beating rivals Newhill 4-1 before earning a crucial 1-1 draw with Lisburn in the season’s penultimate game.

This despite missing some key players.

Gigs is particuarly proud of his daughters - Lucy and Rebecca. The latter scored the equaliser against Lisburn, which gave the whole club a lift.

There is a perfect blend of both potential and experience in the squad and Gigs can only be excited about the club’s future.

“We have a great platform and we will keep pushing.

“Promotion will only attract new players to add to and strengthen the squad.

“We already have some super players here, and of course they can play at a higher level.

“The main thing is that they enjoy playing together.”

With the squad gelling together so quickly, it is obvious there was a lot of hard work put in on the training ground.

“Me and Paul have worked tirelessly,” admitted Gigs.

“And the girls have really put the work in, and at the end of the day it’s all down to the players.

“The coaches are only there for the players - not the other way around.”