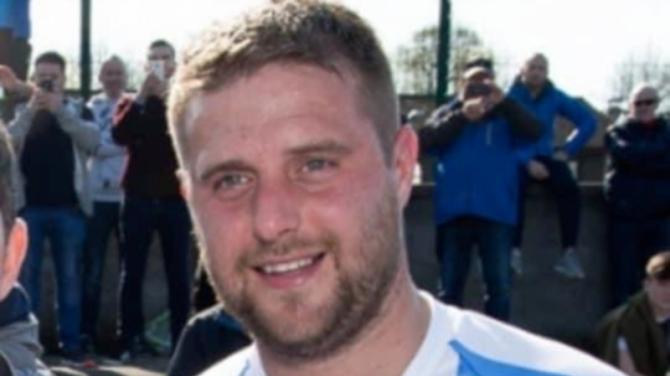 LIAM McMenamin, the new manager of Strabane Athletic, has admitted he had a lot of thinking to do after being approached by the club's board to succeed Eamon Curry, but says he is "delighted" to be given the opportunity after gratefully accepting the role.

McMenamin - who was team captain under the previous boss - revealed he had been offered and rejected the position of manager in the past, but feels now is the right time to take the reigns.

He will bring in the highly experienced Marty Gormley as his first team coach, with last year’s reserve team boss Paul Connolly coming on board as assistant coach.

“It took a lot of hard thinking and there were some sleepless nights,” he said. “But I'm delighted to be appointed the new manager.

“It wasn't an easy decision because there was a lot to think about - obviously I'm still going to be playing and I have such a great relationship with the boys in the squad. But I’m looking forward to it.

“I've been approached about it a few times in the past by the club and back then I didn't think it was the right time.

“There was a lot to ponder but my heart was telling me to go for it this time and I’m eager to take it on.”

Although he will be making the decisions off the pitch, McMenamin has no intention of quitting as a player. Having held the armband for a couple of years now, though, he is considering who could be his successor as skipper.

“Being the captain at any club, there is a certain element of responsibility and it’s a big role, as it is the link between the manager and players.

“As player-manager, I think now is the right time to give up the armband. It will be different and unusual for me, but I really am looking forward to the challenge.”

When asked his goals for the upcoming season, McMenamin said: “The league is the most important. For me, now, it’s about getting everyone in over pre-season, whenever that may be, and getting my ideas and thoughts across.

“I will then introduce the new background staff to the players, and there may be another addition as well. I’m still working on something at the moment.

“But in terms of goals, we want to retain our league title.”

After a hugely successful season in 2018-19 in which the club went unbeaten as they claimed their first ever NI Intermediate League title, Strabane suffered what McMenamin described as a “sticky” 2019-20 campaign.

“I don’t know if it was a hangover from the previous season,” said McMenamin when trying to explain what had gone wrong. “Maybe some of us thought it would be as comfortable as it was last season. But we were brought back to reality quite quickly.

“We want to improve on this half-season and retain that title. Hopefully that will put us in a position, when the stand is complete, ito get promotion.

“However, my aim from day one - whether I was playing or coaching - has always been to be a part of taking this club to senior football. That remains my overall aim.”

Club chairman Seamus Mc Elroy said: “I’m delighted with the announcement. Liam has been a major figure at the club since he rejoined from playing in the Irish League.

"We believe that experience, added to knowledge gained from working very close to Eamon Curry over the last number of years, can help the club continue their development.

"Liam is well respected amongst the players and feels he has a bit more to give on the pitch, so will continue to play and manage the team.

"The player manager role will be a big challenge for him, so he has moved quickly to bring in one of the best coaches around in Marty Gormley.

"Marty will provide a wealth of knowledge and be a vital asset to Liam. Paul Connolly will also join as an assistant coach. Paul managed the reserves last year and did an excellent job.

"Paul Doherty will return to his old role managing the reserve team and it will be brilliant to have his experience back again.

“Overall there’s a good mixture of youth and experience in our management and coaching teams and we look forward eagerly to the recommencement of our matches.”