Strabane Athletic U19 are champions! 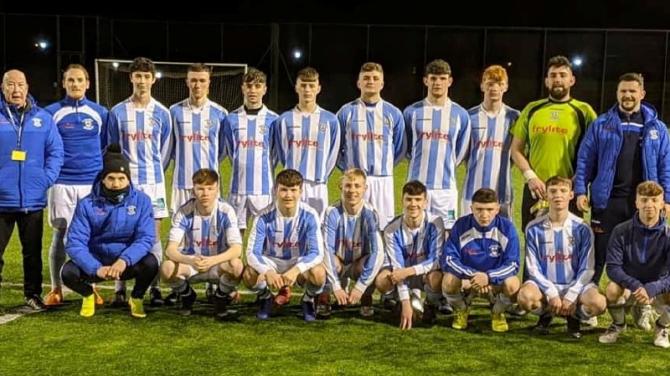 Athletic were lining out for their first final in the newly structured U19 BKYL Cup.

The goals were scored by Conor Williamson, Matthew Stephenson and a brace from Cameron Coyle, as Strabane ran rampant on their Fermanagh opponents.

Strabane started the game brightly dictating the pace with Paul McColgan, Conor Williamson and Ronan McGinley moving the ball around well in midfield.

The first chance came after Matty Doherty made a fine run on the wing and delivered the ball back into the box. The shot was saved and Williamson's follow-up effort was blocked as it headed towards the top corner.

Athletic took firm control of the game and got their first goal of the evening when a corner found the head of the diminutive Williamson who rose highest and a thunderous header went in off the bar.

The half ended with another great chance. The ball came to Coyle who did sterling work in midfield. He linked with his strike partner Jack Quinn and the forward placed a shot into the far corner which was saved well.

The second half started with Athletic looking strong again, obviously not willing to sit on their one goal advantage.

Some fine individual skill from McGinley drew a foul that for most would be out of shooting range. But up stepped Stephenson who from 35 yards unleashed an unstoppable dipping free-kick that put the local lads in the driving seat.

The third followed soon after when some quick-thinking from keeper Ryan McGowan sent Quinn on his way.

The striker’s touch and turn got him away from his man and running down the line. With great composure he beat another defender, looked up and squared for his strike partner Coyle to pass it home from 12 yards.