From Strabane to Grenoble, McClure proud to represent Swifts in France 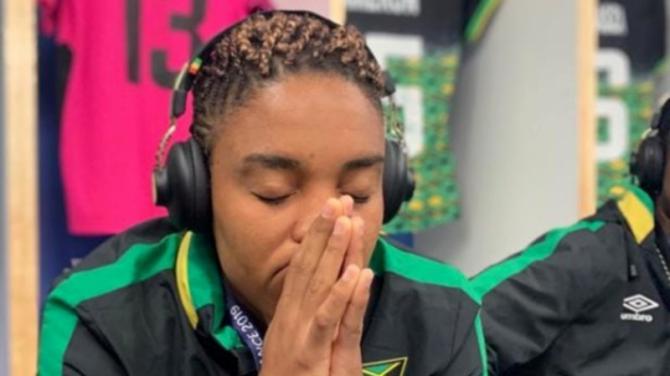 DON'T be surprised if you see a Jamaican flag in the village of Sion Mills or the town of Strabane over the next few weeks.

With neither Northern Ireland or the Republic of Ireland taking part in this year's FIFA Women's World Cup, the locals are throwing their support behind the 'Reggae Girlz' of Jamaica, making their historic bow in the famous tournament.

McClure signed for the Swifts for the start of the Women’s Premiership season from Swedish club Sundsvalls DFF and immediately impressed in goal.

Without the heroics of American-born McClure, whose parents are both from Jamaica, the Reggae Girlz would never have claimed their tickets to the biggest competition in the women's game to date.

The shot-stopper was brought on especially for penalties when a dramatic qualifying play-off with Panama went to a high-stakes shoot-out.

McClure - making her 21st appearance - proved the difference, saving two kicks to send her nation - ranked No 53 in the world - into this year's finals for the first time ever.

While she didn't feature in Jamaica's opening game with Brazil - a 3-0 defeat - McClure will be hopeful she can still play a big part in the summer tournament.

She will strive to stake a place in the team for the games with Italy and Australia on Friday and Tuesday respectively.

While it is not impossible for Jamaica to progress from Group C and claim a place in the last 16, they face a daunting task to do so.

“Jamaica may be the rank outsiders but we use that to our advantage,” McClure told the Stabane Weekly News from Jamaica’s camp in Grenoble.

“We have absolutely nothing to lose. We see ourselves as a contender - we’re not here just to participate.

“We want to show the world that we belong here. We will use our rank as a fuel - as motivation - for the games.”

Five years ago, the Jamaican women's national football team was disbanded due to lack of funding.

It was Cedella Marley, daughter of iconic Jamaican singer Bob Marley, who help turned their fortunes around by coming on board as an ambassador and sponsor with the Bob Marley Foundation.

Marley remains close to the squad members and was one of the first to congratulate McClure on her play-off penalty heroics.

“It has been a very difficult road because we haven’t had any practice matches or any kind of friendly in a couple of years,” continued McClure.

“But we’ve managed to stay afloat thanks to fundraisers, donations from small businesses and family members as well as friends.

“It has been difficult but we rose to the challenge and here we are.”

When McClure arrived at the nation’s world-class training facilities in Grenoble last week, it was the culmination of an incredible journey.

Anything else will simply be a bonus.

“Our hotel is amazing and we train about 15 miles away at a world-class facility,” said McClure.

“The pitches are absolutely perfect.

“I’m feeling great. Everyone is very focused, we are working hard and training smart. We are up for the task.”

As the row about disparity between men's and women's prize money at the World Cup rages on, McClure waded into the argument.

“I think it’s very disappointing that us women have to continue to struggle and fight to even just be heard.

“I’m just hoping that this World Cup will open the eyes of our male counterparts; tell them that we work just as hard as they do and we train just as hard.

“We take our sport very seriously, this is our lives and we have all made huge sacrifices. It shows on the field.

Undoubtedly the women’s game is continuing to grow, emphasised by the fact the World Cup has over a million tickets sold.

A huge number of travelling supporters were in attendance for Jamaica’s opening game, including some of McClure’s family members, including her mum and brother.

“I have a bunch of friends coming as well,” she beamed.

“There are a lot of our fans flying from across the world, the States, Canada and of course Jamaica. We have a huge following which is great!”

McClure, too, is very proud to be representing the local community in Sion Mills and Strabane.

“I hadn’t realised how big of a deal it is for the people of Strabane, but they have been really kind and very supportive. I’m very happy to represent them in France.”

You can tune in to see how Jamaica get on in their penultimate group game against Italy on Friday at 5pm on the BBC.