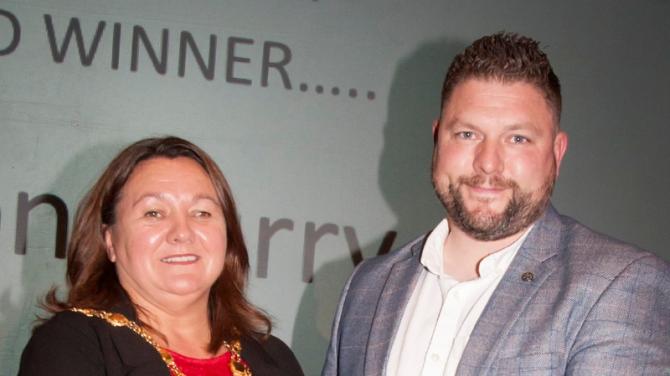 STRABANE Athletic manager Eamon Curry may have been named ‘Male Coach of the Year’ at the prestigious Derry and Strabane Sports Awards on Thursday night, but it was the club’s ‘Team of the Year’ award that meant more to him.

Curry, who is also a coach with Northern Ireland U18 Schoolboys, helped guide Athletic to their first ever NI Intermediate League title.

Speaking to the Strabane Weekly News after his double award, Curry beamed: “I'm over the moon to be honest. I'm absolutely delighted to receive any kind of accolade.

“I stressed to my captain, Liam, that even though I was up for the Coach of the Year, the Team of the Year award was more important to me.

“The boys have worked hard all along. To win the league and to go unbeaten, only conceding eight goals and scoring 40, only dropping six points... it was a fantastic achievement.

“It was richly deserved for their application to training and their general attitude throughout the season. This feels great for the lads.”

He added: “I’m humbled with my own personal award, but the bottom line is that this is all about the team award.”

Ever the perfectionist, Curry feels last season could have been even more successful.

Alongside their league success, Athletic reached the Irish Cup sixth round but they ended their campaign in disappointing fashion, losing 2-0 to Maiden City in the Intermediate League Cup final.

Athletic were also knocked out of the Challenge Cup when they were heavily beaten by Newbuildings 3-0.

“The award caps a fine season, but looking back there were some things I’m not happy about, like the cup defeats towards the end of the campaign.

“But look, this is a young group and they will learn. All in all, if you had given us sixth round in the Irish Cup, the league and to be awarded Team of the Year, I would have taken that.

“The question is, can we push and go again?”

Asked if this was only the start of the awards for Athletic, Curry responded: “That depends on how the players apply themselves next season.

“Awards aren’t given out, they are earned. Some players may just be happy to have won the league and being a part of history.

“Others won’t be. And it’s the players who aren’t happy just yet who have a future in the game - they’re the winners.”

Curry’s award also recognises the work he has done with the Northern Ireland Schoolboys, a club he has been involved with for the last five years.

“We won the Centenary Shield earlier this year. I have worked with some tremendously talented players over the years.

“It’s great for me. I enjoy working with some of the best young players in the country. It’s where you want to be.”

At just 35-years-old, Curry is a relatively young coach but in his first year in management he has already proven his capabilities.

And who knows what the future holds for Curry.

“All I can do is continue picking up projects and making the best of them,” he said.

“Who knows, someone may come in and give me a chance higher up.

“But hopefully, in the next number of years, I’ll be managing in Championship Two with Strabane.

“That is where I would really like to be.”