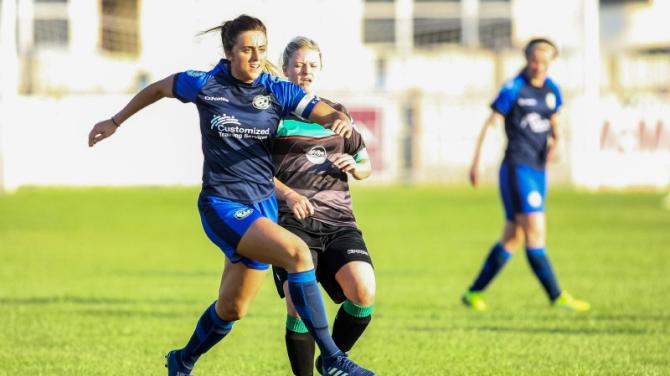 SION Swifts will play in next month's League Cup final after a brilliant 3-1 victory over Cliftonville at Solitude on Monday night.

Tony McGinley's side will now face reigning champions Glentoran in a televised showpiece contest on June 28.

In McGinley's absence, Tony Blake and Alan Hendry took charge of the Swifts for the evening and it was their words at half-time that inspired the turnaround.

The Reds had led at half-time in bizarre circumstances, as Sion goalkeeper Charlotte Ferguson's clearance rebounded in off Leontia McVarnock to break the deadlock.

However, the Swifts took command after the break with three unanswered goals including a long-range effort from Kendra McMullan and strikes from Tyler Toland and Lauren Brennan.

The victory was fully deserved, said McGinley who was fully informed of the game’s details by his background staff.

“Cliftonville scored a freakish and fortuitous goal on the stroke of half-time,” explained McGinley.

“The boys got them in at half-time and their heads were down. But they lifted the tempo after the restart, got the front three playing a little bit closer together and it caused Cliftonville some trouble.

“We have got a final to look forward to now. We have done it the hard way, beating last year’s finalists in Linfield and Cliftonville in consecutive rounds, away from home.

“It hasn’t been an easy journey but we are there. It’s a bonus that the game will be televised live on TV, it’s nice to be a part of. However, we have won nothing yet.

“Glentoran are a very good side, and they will be there or thereabouts when the trophies are handed out at the end of the season. It will be a very difficult final.”

However, McGinley isn’t looking any further than next week. And the next two games could prove pivotal in his side’s season, the Swifts boss has stressed.

They have to negotiate two games in 48 hours, starting with Lurgan Town away on Monday night in the Irish Cup, followed by a mega-league clash with Linfield on Wednesday.

Linfield have won all five of their games so far and top the league table, two ahead of Sion having played a match fewer.

The Swifts have been hugely impressive so far this season, but McGinley knows his side simply cannot afford to lose if they’re to be classed as serious title contenders.

“I have spoken to the girls about the next couple of games. Lurgan are flying high at the top of the Championship, so that is going to be a very tough match.

“We will have one eye on the match with Linfield on Wednesday night. It is not ideal to have two games in such a short space of time.

“But this is why we have a squad, we need everyone on board. It’s nice to be able to replace like-for-like, because we have a quality squad now.

“We are playing very well, performances have been excellent. There will be a buzz around the place for the next couple of weeks with the cup final on the horizon. However, the league is our bread and butter.

“The League Cup success will be put on the back-burner for a few weeks.

“We will have to keep our feet on the ground.”