Athletic miss out on double after cup final defeat 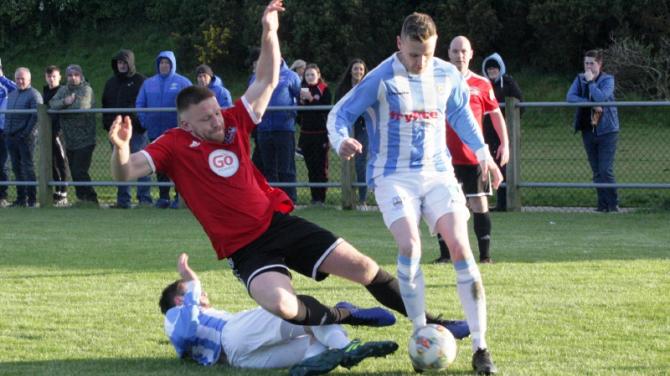 A HUGELY memorable season for Strabane Athletic ended in disappointment following a 2-0 defeat to Maiden City in the Intermediate League Cup final on Friday night.

Eamon Curry’s side sealed their league success last month and were hoping to achieve an impressive double.

But they produced a lacklustre performance and were deservedly beaten by Maiden on the night.

Athletic were also knocked out of the Challenge Cup a fortnight ago when they were heavily beaten by Newbuildings 3-0.

After an historic season in which they beat all odds to be crowned league winners, Athletic’s season has rather petered out.

“I’m trying to piece together why it has happened,” said Curry.

“I think we have lacked a lot of application since we won the league.

“Newbuildings put three past us without reply recently and the two trophies left to play for, we just weren’t up for it. I’m still trying to work out why.

“It’s something we will have to look at next season.

“As staff we still pushed training as hard as we could. I think when we won the league, the boys relaxed.

“But they probably needed a break. They have put a lot of effort into winning the league; it’s not easy to go unbeaten in the league campaign.

“I don’t think it was complacency. They are too good of a bunch, mentality wise. I just think it was a case of the other teams wanted it more.

“When we won the league, we knew we had the big one. Other teams were looking for their silverware.”

In a game where both sides had chances it was Maiden City who provided two clinical finishes to take the trophy to Foyleside for the second year in succession.

In the early stages Gearoid McDermott fired well over for City and Athletic responded with a good one touch move which ended with Sean Ferry's shot safely gathered by Maiden City keeper Gareth Muldoon. McDermott was just wide with another effort for the Derry men after he latched onto a defensive mistake and Declan McKeever saw his shot go over the bar as Maiden City provided the greater threat.

Excellent tackles from Liam McMenamin and Michael Logue kept Athletic's goal intact before the local lads responded with a Sean Ferry shot straight at keeper Muldoon. Jack Boggs lost possession at the edge of his area but redeemed himself by superbly saving the resulting effort.

Around the half hour mark City forced a corner which was headed clear but a lovely strike by Dwayne McBrearty found it's way to the net and Maiden City had the lead. Athletic responded well and applied good pressure for the remainder of the half. In the 44th minute a great low cross from Kyle Harte found Aodhan Doherty but his close range drive was brilliantly saved by Muldoon and City had the advantage at the interval.

The second half was a scrappy affair with neither team achieving dominance. Strabane showed urgency in their search for an equaliser but the Maiden City defence was resolute throwing bodies in the way to block several shots. The Derry men almost doubled their lead when Colm McGhee's shot whistled past the Strabane upright.

Warner Mullen tried a free kick for Strabane before the second and deciding goal arrived for City. Gearoid McDermott was a handful for the Athletic defence throughout the game and he did very well to set up Tiarnan O'Connor for a good finish with 20 minutes to go.

The Derry men defended well for the remainder of the game and McDermott almost added a third but shot too high. Strabane thought they had set up a nail biting finish when skipper Liam McMenamin headed home a great cross from Michael Logue but an offside flag cancelled out the effort and the trophy went to Maiden City.

Despite this loss, Strabane Athletic will reflect positively on what has been an exceptional season. They went through the entire League campaign undefeated, reached the sixth round of the Irish Cup and brought a magnificent first ever Intermediate League title to the town. The squad take a break now before the hard work begins again with pre season training in the first week of August.

Curry has stressed that to retain the league title is his main priority next season.

“The priority, as long as I’m manager, is the league. The best team and the most consistent team wins the league.”

The Athletic boss believes it will be a busy summer of transfer activity at the club.

“I call it the rat race. Clubs are after your players, you’re chasing players. It’s just the way it is.

“I have been in contact with about six players already - it’s important to freshen the group.”