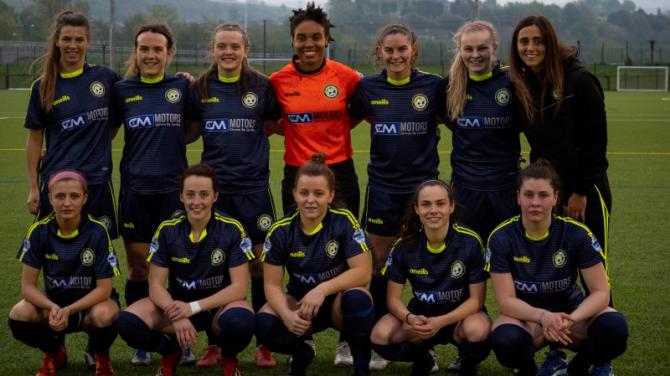 WITH two wins in five days, it has been the perfect week for Sion Swifts Ladies.

Tony McGinley’s side registered their first points of the Danske Bank Women’s Premiership campaign as they edged out Crusaders Strikers by a single goal at Melvin Park Arena last Wednesday evening.

And they exacted revenge on Linfield on Monday night, beating the giants 2-1 on their home patch to knock them out of the NIFL League Cup.

Starting with the league game, and Ciara Grant's goal four minutes from time was enough to win the game for the hosts over an experienced Crues side in a closely-fought encounter.

The Swifts were without captain Kendra McMullan but enjoyed the majority of the possession and opportunities in the opening half.

Chloe McGlade, making her first appearance of the campaign, came off the bench for Sion Swifts in the second half and forced two opportunities.

Grant won the game with a close-range finish in the dying moments as the home side’s pressure paid off with build-up play from Tyler Toland and Claragh Connor eventually finding the striker, who made no mistake inside the area to decide the game.

“We knew, even at this early stage of the season, that it was vital not to drop any more points.

“We were absolutely dominant for the 90 minutes. We struggled to break them down and I didn’t think we were going to do it. It would have been a travesty if we didn’t.

“It looked like it was going to be one of those nights, so there was sheer relief when we scored the winner.

“That gave us a lift going into the match with Linfield.”

It certainly did, as the Swifts were much improved from their 1-0 opening day defeat as they sealed their place in the semi-final in style.

Goals by McGlade and Aimee Mackin sent them through to the last-four of the competition.

Megan Bell scored a late consolation for Linfield, who were also knocked out of the County Antrim Cup earlier this month by Cliftonville.

McGlade opened the scoring for the Tyrone outfit after a goalmouth scramble in the third minute.

Mackin doubled the lead midway through the first half before a string of excellent saves from Jamaican international goalkeeper Nicole McClure maintained the visitors' lead, with Bell scoring for the hosts in injury time.

“There were some fresh faces in the squad,” explained McGinley.

“We knew we would ask more questions of them and that’s exactly what we did.

“The players didn’t do enough in the 1-0 defeat to Linfield earlier this month, but on Monday night the result wasn’t a fair reflection of the game because they were just so good.

“We missed chances in both halves, we should have been out of sight by half-time.

“We were full value for the win, but listen it wasn’t a shock. It was anything but an upset. We believe if we can get the right players on the pitch then we’re as good as anyone in the country and Monday night proved it.

“Aimee Mackin came back into the team and for me, she is the best centre-forward in the country. There isn’t a club, north or south, that wouldn’t want her.

“When she plays, she gives us a completely different dimension.

“It’s not an exaggeration to say that it takes two opposition players to look after her. Her pace and movement is an absolute joy to watch.

“Even her name on the team-sheet strikes fear into the opposition.

“We knew we didn’t do a lot wrong in the first match against Linfield, but we were missing that little bit of spark to compliment the good work that was going on in other areas of the pitch.”

Swifts will play a home tie with Cliftonville Ladies in the semi-final on May 27, with the north Belfast club having received a bye through to this stage of the competition.

“We’re into the semi-final now and Linfield are out, we’ve got a home draw against Cliftonville - all we can ask for is a home match at this stage.”

Tonight (Wednesday) Swifts will host league leaders Glentoran at Melvin with an 8pm kick off.

Glentoran have made a strong start to the season, winning all three games without conceding a single goal.