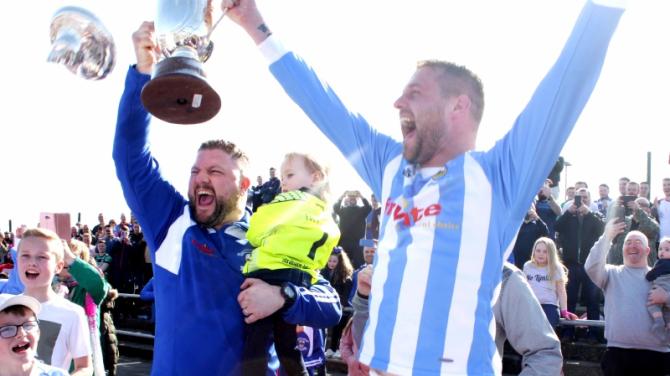 STRABANE Athletic manager Eamon Curry has said his men's title-winning heroics was truly a team effort by a hard-working group of players.

Athletic sealed the NI Intermediate League for the first time in the club's history with a thumping 6-0 win over Magherafelt Sky Blues at Melvin Park on Saturday.

Curry's side have won 11 of 12 games and are still in the running for two more trophies. They have reached the final of the League Cup and the quarter-final of the Challenge Cup.

Asked if he could single out a star man throughout the season, Curry said: "Everybody. I know that sounds like a watery answer.

"What I can say is that last year I assessed the group and I knew we needed we bring in a wee bit more experience.

"Liam McMenamin has come back in and he's just a good fella all around. People have so much respect for him and from a manager's point of view, to have a captain like that, is great.

"We have kept good players in Conal Crawford and Aaron Porter. Warner Mullen came back in, Jack Boggs has come in having picked up good experience at Dergview.

"It was important to get the balance right because we have a lot of good young players."

Curry said the club hold ambitions to move up through the divisions in the future - but admitted facilities needed to be improved.