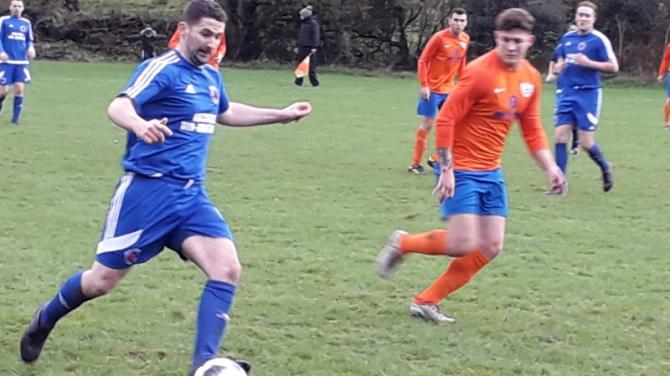 DONEMANA got back to league action and came away with an empathic home win to move one point behind Ardmore again.

Things started very well for Donemana when they took the lead inside the opening five minutes when Timmy Dougherty rose well to head home from a Jasy Milligan corner. It was 2 0 shortly after as Timmy Dougherty was fouled in the box and Jason Milligan tucked away the penalty nicely.

Donemana were comfortable and passing the ball about nicely. Alan McFaul was playing with high energy and popping up everywhere. He got his first of three goals when he headed in from close range when he found himself free at the back post from a long throw by Ross Campbell, 3 0.

It was 4-0 on the half hour mark when McFaul got his second with a sweet strike on the half volley from outside the box into the back of the net, a great goal and Donemana were cruising.

On the stroke of half-time Levi Dougherty got a goal when a quick throw by Milligan released Grant Garden and he crossed in to the box and McFaul had a snap shot which the keeper parried but only to the feet of Dougherty who finished to make it 5-0 at half-time.

Donemana again started the second half well with Timmy Dougherty making a driving run in to the box and his shot was not held and Garden following in was able to tuck it away 6-0.

‘Man of the match’ McFaul then got his hat-trick with another powerful shot from outside the box in to the corner of the net giving the keeper no chance. A perfect hat-trick with left foot, right foot and header.

Garden then got his second when Milligan crossed and Dougherty chested it down for Garden to finish well and make it 8-0.

Billy Dougherty then got in on the act to complete the rout when it turned his man well on the left and drove in to the box and finished well with a low shot in to the far corner to leave the final score 9-0.

An impressive team performance from Donemana in front of as usual good home support. Manager David Scanlon was pleased to get back to winning ways.