Donemana progress to next round of North West Cup 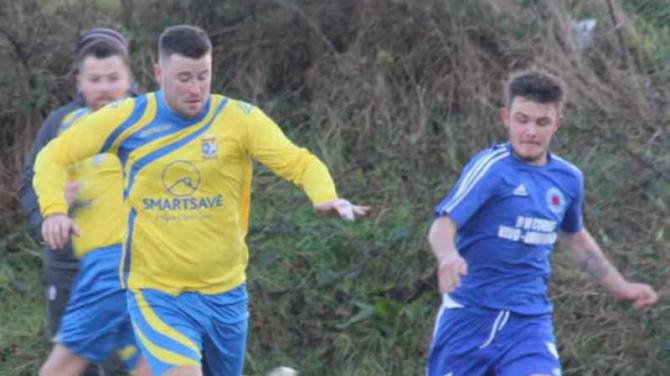 DONEMANA travelled to Limavady on Saturday to take on Roe Rovers in the second round of the North-West Cup and came away with a hard-fought victory in terrible weather conditions.

Donemana took the lead on six minutes when their front two combined well to create the opportunity. Levi Dougherty played a ball through which Grant Garden picked up on the edge of the box and he shimmied past the defender and scored with a good low shot to give Donemana a 1-0 lead.

It could have been 2-0 shortly after but Levi Dougherty was unlucky to see his shot come back off the cross bar after being played in by Billy Dougherty.

The game was very even in the first half with both teams creating chances and Roe Rovers had a couple of good efforts which were well saved by Donemana goalkeeper, Craig Campbell, to keep Donemana in front.

Roe Rovers got an equaliser just before half time when a ball over the top was not cleared properly and their forward ran onto it and scored with a low shot across the keeper.

The second half was still pretty even with some solid performances and some chances created at both ends but both defences were solid with Joe Robinson and Ally McFaul putting in good shifts.

Billy Dougherty was also putting in a good effort and good inter play between him and brother Levi created Donemana’s next goal as Levi played Billy into the box and his run was ended when he was fouled and the referee awarded the penalty. Jason Milligan stepped up and converted to give Donemana a 2-1 lead with about 10 minutes to play.

Roe Rovers pushed for the equaliser and got it near the end when the Donemana keeper fouled their player in the box and the ref gave the penalty which they scored.

The tie went to extra time and Donemana got off to a flier when they scored twice inside the first five minutes. Levi Dougherty good run continued and he got another goal when he picked the ball up on the edge of the box and fired a perfect shot into the top corner of the net a very good goal for Donemana to regain the lead 3-2.

Donemana then got another goal when a good free kick in by TJ Nicholl was powerfully headed home at the near post by Grant Garden for his second of the game and Donemana’s fourth.

A bit of breathing space and Donemana were able to see the rest of the game out although Roe Rovers did score right at the death to make the final score 4-3 to Donemana, to allow them to progress to the next round of the cup.

A good battling performance that pleased manager David Scanlon who even made a cameo appearance from the bench.

Thanks to all the supporters who travelled and stuck it out on a very wet and windy day.