Athletic come from behind to beat Oxford 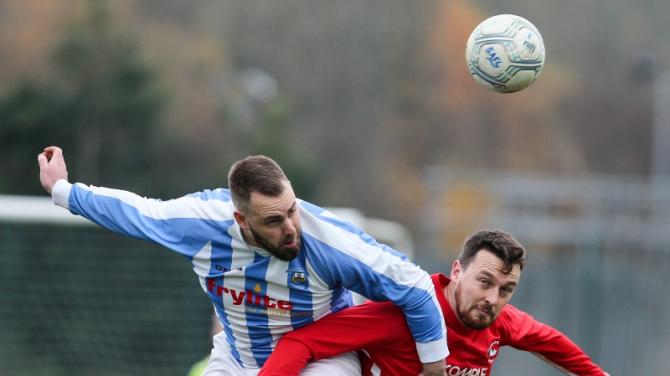 STRABANE Athletic came through a tough test against Derry side Oxford United Stars at the weekend to keep their Intermediate League title hopes on course.

Athletic had an early chance when skipper Liam McMenamin headed wide, while at the other end keeper Jack Boggs had to make a good save to keep out a header from the home side.

A long ball from the Oxford defence released centre forward Conchur Boyle and his cross was deflected into his own net by the unfortunate Mark Roarty.

Athletic were unsettled at this stage and almost fell further behind when another long ball again found Boyle but this time he shot over the bar.

It was around the half hour mark that Strabane began to find their feet and Aaron Porter had a couple of shots.

At the other end an Oxford long throw wasn't dealt with and Jason Donegan headed over Athletic's crossbar from close range.

The visitors achieved parity on 35 minutes when a great cross from full back Stephen Cairns was headed home by Aaron Patterson. Strabane took control of the game from then on and a nice move involving Luke McGeehan and Aaron Porter ended with Sean Ferry's shot being blocked on the line.

There were further efforts from Patterson and Porter but the teams went in level at half-time.

A spate of injuries at the start of the second half forced several Strabane substitutions. Defender Matthew Stephenson departed and was replaced by Dylan Forbes.

Then Aaron Patterson went down with a hamstring problem prompting the introduction of David Taylor and shortly afterwards Sean Lynch came on for the injured Alex Carolan.

Despite the changes Athletic maintained their attacking momentum and apart from an Emmet Hargan shot comfortably saved by Boggs all the action was in the home team's penalty area.

Ferry, Porter and Lynch were all foiled by keeper McLaren and it began to look as though Strabane would have to settle for a share of the points.

However, on 78 minutes, Boggs launched a long kick which was headed by Ferry into the path of Aaron Porter who finished well to finally beat McLaren. It was relief all round for Athletic and they managed to see the game out comfortably and had chances to extend their lead when Conal Crawford and Aaron Porter both went close.

The win sees Strabane Athletic in second place in the Intermediate League table, two points behind current champions Magherafelt Sky Blues who have a maximum nine.

There is now a break from league action for Strabane who have cup ties on each of the next three weekends, starting with Saturday's home match against Rosemount Rec. from Greyabbey in the second round of the Intermediate Cup.