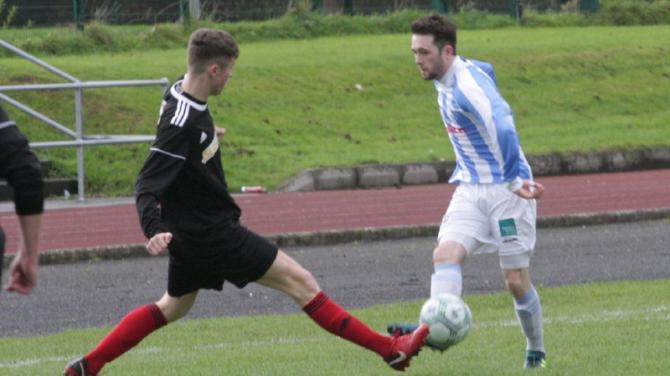 STRABANE Athletic welcomed opposition from County Down to Melvin Park for round three of this season's Irish Cup and it was the local team who progressed, moving a step closer to a potential fifth round tie against Premier League opposition.

Saturday's visitors started the game at a high tempo pressing Strabane high up the pitch, sending in a few shots and making things uncomfortable for the Athletic rearguard.

However, it didn't take the home team too long to settle and Dylan Forbes headed over from a corner after five minutes before Kyle Harte tried a low, left footed effort which wasn't far wide. Conal Crawford hit a free kick from outside the box but his effort was blocked by the defensive wall.

Banbridge were playing with the assistance of a strong breeze and launched a succession of long and high balls but they found goalkeeper Jack Boggs and his central defenders Liam McMenamin and Dylan Forbes to be very reliable on the ground and in the air. Luke McGeehan did a fine job tracking Banbridge runners from midfield and for all the visitor's possession, it was Strabane who posed the greater threat as the half progressed.

Ryan Moffat's shot sailed over the bar for the County Down side and at the other end a superb run to the byline by Alex Carolan ended with a pass to Sean Ferry whose shot was blocked. A wind assisted free kick then caused concern for Strabane but it evaded everyone. Next Jack Boggs saved a low shot from Neil Clydesdale and also safely gathered a follow up effort.

The half nearly ended successfully for Athletic but Conal Crawford's excellent defence splitting pass had the goalkeeper rushing off his line to deny Ferry and the teams went in level at the interval.

The strength of the wind eased considerably but Strabane created a few chances at the start of the second half. First Ferry found Harte whose effort was just wide, while a Stephen Cairns cross just eluded Eamon McGrath. Banbridge's best passing move finished with a shot which required a good diving save from Jack Boggs in the home net.

Around about the hour mark a break by Eamon McGrath took the Athletic forward into the penalty area where he calmly picked out Conal Crawford who gave the local side a 1-0 lead.

McGrath was involved in another significant event minutes later when his persistence took him past the last defender Stephen Acheson. The Banbridge man saw red when he fouled the striker and a difficult task for the visitors suddenly became much harder.

Strabane's wide players Harte and Carolan had been causing problems from the outset and so it was to continue with Athletic absorbing the visitor's best efforts and utilising the pace of the wingers on the break. David Taylor came on for Carolan and kept up the pressure with several great runs and crosses.

Strabane had chances to extend their lead when Crawford drew a good save from the visiting net minder and a fine Kyle Harte pass just failed to play in Sean Ferry. To their credit the ten men were never out of it and it took a brilliant save with his feet by Jack Boggs to deny them parity late on in the game.

Joe Breslin then had an effort saved before Sean Ferry settled all the home nerves with a superb volley from outside the area to double the advantage.

So Strabane are in the hat for round four and will be hoping for another home draw before they can start to contemplate top level opposition in later rounds.

After the game Strabane boss Eamon Curry paid tribute to the good crowd who came along to support the team. "The players get a tremendous boost when they play in front of great support like today, let's hope everyone will stick with us for our league campaign," said the team manager. Curry went on to praise Athletic's U9 squad who entertained everyone with an exhibition match at half time and the manager also thanked parents for their help.