Athletic comfortably into next round 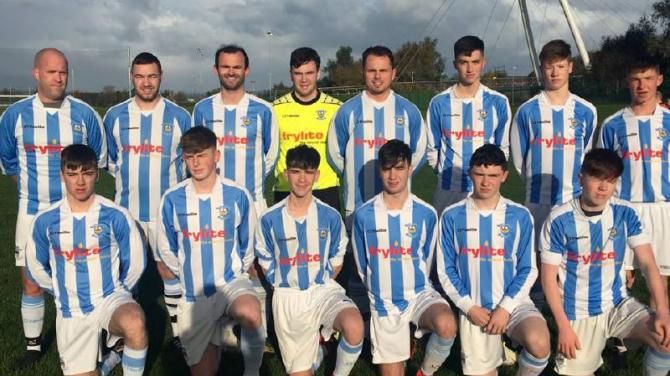 STRABANE Athletic travelled to the University Sports ground in Coleraine for a quarter-final encounter  with Coleraine’s U20 team and found themselves comfortably in the driving seat after 10 minutes courtesy of goals from Sean Ferry and captain Liam McMenamin.

Ferry again went close on the half hour after good work by Carolan on the left.

On 35 minutes Carolan retired with a groin strain to be replaced by Lynch who  was only  on the pitch a matter of minutes before he extended Strabane’s lead to 3-0 slotting home a pass from Cairns at the back post.

Porter then almost found the net from the edge of the box after Cairns and Lynch combined well.

After  the restart Athletic continued to take the game to Coleraine.

They pressurised from the back as McGeehan and Forbes forced the ball forward, McGrath and Porter both drew saves from Brown in the home goal.

Crawford and Porter had control in midfield and Boggs in the visitor’s goal had a relatively quiet afternoon.

On the hour mark, Ferry played in a cross from the left and McGrath was there to strike a left footed shot.

McGrath was then unlucky not to score after a solo run took him past three Coleraine players but his finish was over the bar.

McShane replaced Ferry and settled in well, but it was Taylor who was next to go close when he forced an excellent save from the home netminder.

Conal Crawford was then replaced by younger sibling Oran as the game went into the last quarter.

McGrath forced a corner which was cleared and Forbes found the side netting with his effort.

The fifth and final goal came after a neat passing  move between Porter and Taylor was finished off by McGrath to double his personal tally.

Strabane overcame a young Coleraine side and experience was a big factor in the outcome.

Next week’s game is at Melvin in round three of the Irish Cup and Banbridge Town should no doubt prove a sterner test for the locals – a more competitive game is expected.