Comfortable win sees Athletic into next round of the Intermediate Cup 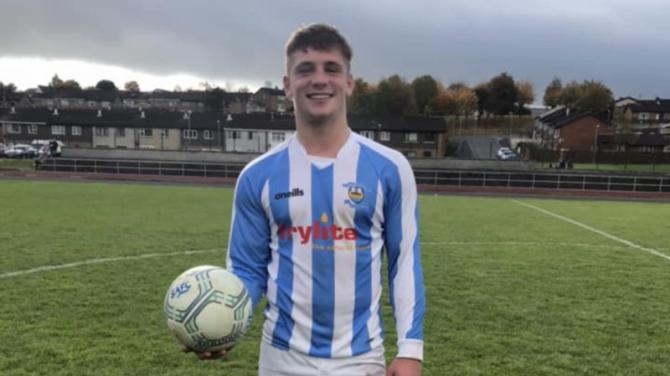 STRABANE Athletic are in the draw for Round 2 of this year's Intermediate Cup after a comfortable win over Dungiven Celtic at the weekend.

There was plenty of action in the opening minutes as Sean Ferry picked out strike partner Aaron Patterson whose shot was gathered by Dungiven keeper Conor O'Kane.

Athletic then found themselves a goal down when a defensive mix up gifted visiting forward James O'Kane a second minute goal.

Strabane responded immediately and team captain Liam McMenamin's header was well saved but from the resulting corner Aaron Patterson made no mistake at close range and parity was restored.

It was Patterson again in the eighth minute rifling home a penalty awarded for pushing in the box to give the home team the lead.

It was an advantage that Athletic never looked like relinquishing and after having a shot saved Conal Crawford converted a great low cross from full back Stephen Cairns for Strabane's third.

On the half hour mark Sean Ferry was on hand to add another goal and send the home side in at half time with a healthy 4-1 advantage.

The onus was very much on Dungiven to try and rescue the cup tie after the interval but the second period began with Athletic on the attack when Patterson burst through on goal but shot wide.

The visitors did show a bit more urgency after this but Strabane's defence featuring teenagers Stephen Cairns, Aodhan Bishop and Mark Roarty under the stewardship of skipper McMenamin coped comfortably with anything the County Derry side's attack had to offer.

After a speculative long range effort Dungiven seemed resigned to their fate and it became a matter of if and when Athletic would score again. Aaron Patterson and Aaron Porter were both off target and Alex Carolan rattled the cross bar from close range.

Eventually the fifth goal did arrive courtesy of another Patterson penalty. This time the striker calmly slotted his kick into the corner to complete his hat trick and a convincing victory for Strabane.

Next up for Athletic is an away trip play Coleraine U20s in the Craig Cup quarter final. Kick off is at Coleraine University at 1.30pm.