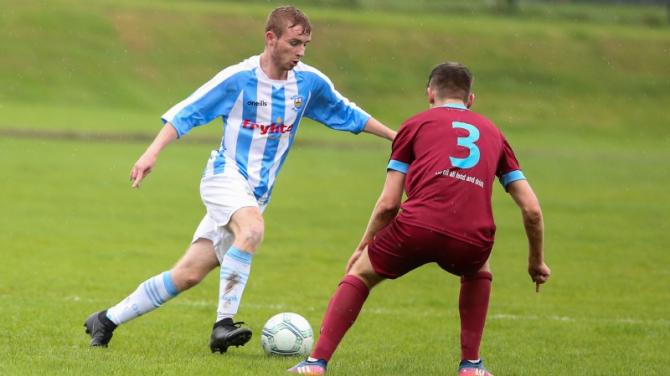 STRABANE Athletic had to rely on a very late equaliser to secure a point against a spirited and determined Newbuildings United in the weekend league fixture at Melvin Park.

The match was played in incessant heavy rain and both teams struggled throughout the game to achieve any passing fluency.

Attempts on goal were scarce and in the first 25 minutes a shot which cleared the bar by Athletic's Luke McGeehan and an effort which went wide from the visitor's Jack McClelland was all either team had to show.

The first sign of any drama to capture the interest of the soaked spectators occurred around the half hour mark when Newbuildings' keeper Jack Le Moignan had to move swiftly to deal with an under hit back pass and his clearance rebounded off Strabane's Eamon Mc Grath but bounced safely wide of the net.

Athletic found a bit more urgency in the last 15 minutes of the first half and Conal Crawford's shot was saved by Le Moignan and Sean Ferry's header rolled across the goal line.

The visitor's also had a couple of efforts, one saved by Jack Boggs and another which sailed over the bar. The last action of the half saw a great break by Strabane's Aaron Porter who found Eamon McGrath but his shot went wide to leave a dull encounter level at half time.

The beginning of the second period was marked by early corners two for Newbuildings and one for Athletic but both defences dealt well with these.

David Taylor hooked a shot over for Strabane but Newbuildings were enjoying decent possession in Athletic's half and creating a few chances from free kicks.

The home team had a well struck shot from Crawford which just cleared the bar however the Newbuildings threat from set pieces paid off 20 minutes into the half; when a superb delivery was headed home by striker Justin Mc Faul.

Jack Le Moignan in the Newbuildings goal prevented an immediate equaliser by saving brilliantly from Aaron Patterson. This signalled an Athletic onslaught in search of parity but the villager's defence stood firm.

Patterson had a couple more efforts and Stephen Cairns and Crawford saw efforts cleared off the line and well saved by the impressive Le Moignan. At the other end Rickie Lee Dougherty wasn't far away from doubling the lead when a low shot flew past Strabane's upright.

It was looking very likely that all three points would go to Newbuildings when efforts from Patterson and McMenamin were deflected and just missed.

However Strabane were awarded for perseverance in injury time when Stephen Cairns shot eventually breached a brave defence to earn the home team a point.

Athletic will view this as points dropped but they will certainly be somewhat consoled by an equaliser so late in the game, which sent the good crowd of supporters who turned out in such bad weather home feeling relieved.