Ferry at the double as Athletic down Ardstraw 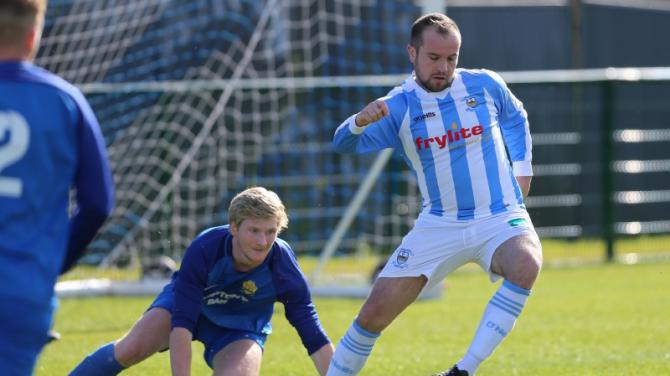 SECOND-half goals by Sean Ferry, after Aaron Porter and Conal Crawford had set Strabane Athletic on their way, sealed an impressed victory over Ardstraw at Vaughan’s Holm in the Northern Ireland Intermediate League.

Both clubs have added to their squads over the summer and with good performances in pre-season and recent cup ties, managers Ivan Sproule and Eamon Curry would have realistic expectations of a title challenge this year.

The game started at a lively pace and the home team were on the offensive, forcing Athletic's keeper Jack Boggs into a smart early save. Shortly after that Samuel McKelvey had another shot for Ardstraw which wasn't far wide.

Strabane lost Ronan McBrearty to injury in the 12th minute and young Matthew Stephenson replaced him in the left back position. Conor Carlin's pace was causing problems for Ardstraw on the left but the winger's crosses couldn't find his strikers.

It was 25 minutes before Strabane registered a shot on target when Conal Crawford's effort was safely gathered by Andrew Gaily. Dylan Forbes headed over for Athletic and around the half-hour mark both sides had created chances but Ardstraw had had the better ones.

However the visitors were growing in confidence and on 38 minutes they fashioned a couple of nice passing moves which created opportunities for Conor Carlin, both of which were deflected for corners. From the second of these Aaron Porter's kick deceived home net minder Gailey and went straight into the goal despite the keeper's desperate attempts to keep it out.

Strabane were finishing the half very positively and it took a terrific reflex save by Gailey from Carlin's point blank volley to ensure the margin was only one goal at the interval.

Athletic were quickly into their stride in the second half and skipper Liam Mc Menamin was denied by a deflection as Ardstraw defended a free-kick followed by a corner. Aaron Porter then broke through on goal and was brought down in the box for a penalty clinically dispatched by Conal Crawford to double the advantage.

The villagers were stung into action and Strabane were forced into sterling defensive work on the ground and in the air. A great tackle by Dylan Forbes to foil Samuel McKelvey was followed shortly afterwards by Athletic's third goal when Sean Ferry knocked home a rebound after Gailey had parried a low shot.

That was the insurance goal and Strabane dominated from then on, scoring a fourth when David Taylor worked very hard to keep the ball in play and supplied a fine cross for Ferry to nod home his second goal at the near post.

So a much more convincing victory for Strabane Athletic than they might have expected but reward for good preparation, organisation, skill and effort. The local team now face Newbuildings Utd at Melvin on Saturday knowing that the high standards have to be maintained all season if they are to be competitive in a very tight league.