Back to back win for Donemana as they see off Eglinton 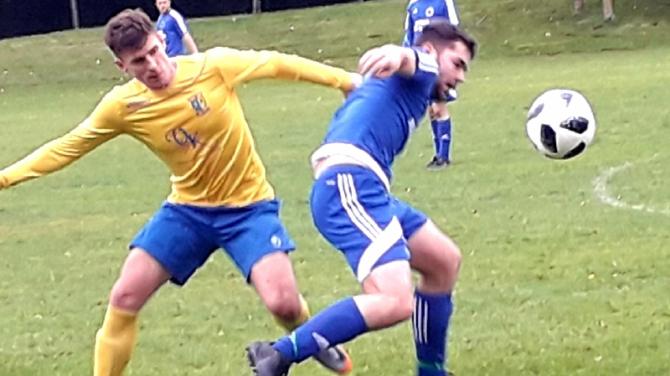 DONEMANA took on Eglinton at home on Saturday and eventually came away with a comfortable enough victory although it was much closer for a lot of the game before the hosts ran out 6-3 victors.

Donemana started brightly and took the lead on 10 minutes when Ross Campbell played a good ball down the line which Levi Dougherty ran onto and coolly rounded the keeper and finished well with a low shot.

Eglinton equalised when an attempted back header to the Donemana keeper could not be gathered and their forward then ran in to tap home.

The game was even enough after this and Eglinton took the lead when the ball was not fully cleared at the back and Eglinton could counter attack and score 2-1.

Dougherty went close again with a powerful shot at the near post which their keeper saved well. Donemana equalised on the stroke of half-time when Alan McFaul headed home from a Jason Milligan corner, it was a well taken goal and 2-2 was a fair reflection of the first half.

Eglinton regained the lead early in the second half when a quick throw down the line caused confusion in the Donemana box and their player nipped in to score.

Donemana equalised shortly after when good interplay in the midfield led to the ball slipped through to Timmy Dougherty who ran on to it and finished well with a low shot.

Donemana upped their game after this and were playing the better football, substitute Grant Garden saw his shot come back off the crossbar when the net was waiting, but they did gain the lead shortly after when a free-kick in from the right found its way to Kyle Dougherty who finished well from close range to make it 4-3.

It was 5-3 shortly after when the ball was played through to Grant Garden whose shot beat the advancing keeper and nestled in the back of the net.

Garden then got his second and calmed any nerves the home support had as he found space at the back and finished well with a powerful header to make it 6-3.

This was the final score in an entertaining game and is now back-to -back victories for Donemana.

The club would like to thank Ronnie McCombe and his staff at Ron’s Fast Food for sponsoring the match ball and for supplying the food after the match.