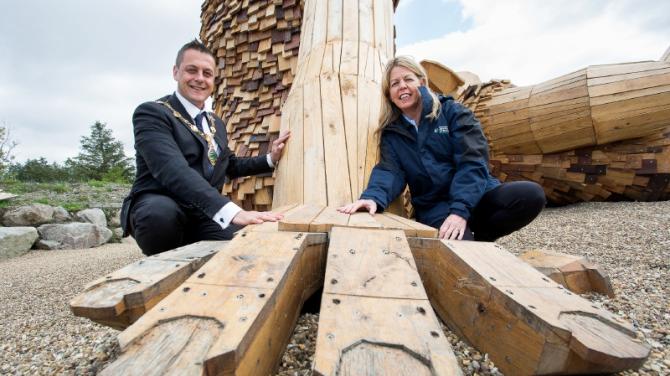 FUNDERS for the new Sperrins Sculpture Trail project were recently given an exclusive preview of the giant steps taken to date towards progressing with this innovative tourism project that is expected to be unveiled later this year.

Work is at an advanced stage at three site locations in the Sperrins in preparation for the arrival of the Giants, a trio of interrelated and unique art pieces being created by world acclaimed artist Thomas Dambo.

The art pieces are part of the Sperrin Sculpture Trail being delivered by Derry City and Strabane District Council in partnership with Fermanagh and Omagh District Council and Mid Ulster District Council, in this popular area of natural, unspoilt beauty in an effort to drive rural tourism and investment in the local natural and built heritage.

The Sperrins Sculpture Trail is delivered through the Rural Tourism Scheme as part of the Northern Ireland Rural Development Programme 2014-2020 with funding support of over £1.32m from the Department of Agriculture, Environment and Rural Affairs (DAERA) with match funding totalling £568,000 from the partner councils.

Work is at an advanced stage at all three of the sites and funders, partners and community representatives were given an update on site of the work carried out to date ahead of the arrival of the giants and the Sculpture Trail ‘big reveal’ later this year.

Mayor of Derry City and Strabane District Council, Alderman Graham Warke, visited the Cranagh site and said he was impressed with the progress to date.

He said: “I am delighted to see this giant step forward in this hugely important tourism project for the Sperrins that will bring much needed investment to the region and encourage visitors to our rural heartlands, whilst preserving the natural assets for our rural communities.”

Rural Affairs Minister, Edwin Poots MLA said: “These are exciting and unique projects for Northern Ireland and will be among the ‘must see visitor’ attractions.

"I am delighted that my department has part-funded just over £1.32m toward the total project costs of £1.7m under the Rural Development Programme 2014-2020 Rural Tourism Scheme.

“Tourism is one of the key economic sectors for Northern Ireland providing jobs and livelihoods and supporting many local businesses, including many in rural areas.

"These striking sculptures will attract additional visitors to rural Northern Ireland and provide a much needed boost to the local economy.”

Last year, world renowned, Copenhagen based artist Thomas Dambo and the design and construction consultancy team McGurk Architects were appointed to take forward the development of this hugely exciting and innovative project that will not only showcase the epic stories associated with the Sperrins, the inspirational nature of the landscape but also the giant spirit and welcome of its people.

Speaking of the project, Mr Dambo said: ﻿"﻿It's been a true delight to work in the hills of Sperrins, though for the three giants: Nowanois, Ceoldán and Darach it has been a rather adventurous conception and journey through rain, hail, fog, low hanging clouds, and a wind like no other.

"Delving into Irish history has been an eyeopener. Maybe the solution to the challenges we face today, can be found in the ancient wisdom of balance."

The sense of curiosity and suspense ahead of the arrival of the Giants is creating a real sense of anticipation and inquisitiveness among the local communities in the Sperrins.

Details of the official launch and big reveal are expected to be announced later in the summer.