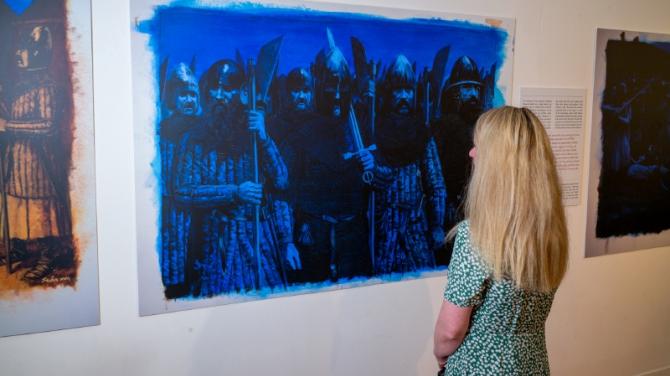 AN exhibition which will explore the Battle of Knockavoe 500 years on from the historic event has opened at the Alley Theatre.

In the absence of contemporary collections from that time period of 1522, the exhibition seeks to recreate the gravity of the conflict between the O'Donnell and the O'Neill families through illustrations, replicas and augmented reality.

It is open at the local theatre until July 22.

The story begins with Con O'Neill, a newly appointed chieftain of the O'Neill's, raising an army of over 2,000 troops and leading part of his army into west Tyrone.

Manus O'Donnell responded by marching to the border with Tyrone, near where Strabane is today. O'Neill set up camp at Knockavoe.

To overcome Con's superior numbers Manus decided on a night attack, not without risk as neither force could be easily identified in the darkness.

The clamour and confusion largely destroyed O'Neill's ability to mount a stout defence, and the slaughter during the battle left 900 of O'Neill's forces dead, handing Manus a decisive victory in the campaign.

Eventually the two families forged an alliance against encroaching English rule in Ireland but later the Earls of both families, Rory O'Donnell and Hugh O'Neill, left Ireland in the 'Flight of the Earls' - signifying the start of the Plantation of Ulster.

Roisin Doherty, curator of the Museum and Heritage Service at Derry City and Strabane District Council, said: "We've had to think hard about how to recreate the dramatic and epic battle that took place at Knockavoe without any artefacts or collections from that period, so we commissioned beautiful and well-researched artwork from Seán Ó Brógáin, high-quality weapons and clothing from Oireas Historical Services.

"We also have a wonderful use of modern technology through an AR experience by Imvizar – which is a first for the Museums Services team.

"This is a creative and innovative way of exploring a fascinating and important period in our history where we don't have any artefacts or traditional materials to work with.

"The replicas and weaponry are a wonderful example, through years of research, of authentic 16th century Irish Clothing and weaponry, and the AR experience will transport people back to an era that has long been forgotten.

"We would invite everyone interested in experiencing all that the exhibition has to offer and looking to gain an insight into the events of the Battle of Knockavoe, to visit the Alley Theatre before July 22."

The Knockavoe 500 exhibition is open at the Alley Theatre from 10am to 4.30pm, Monday to Saturday.