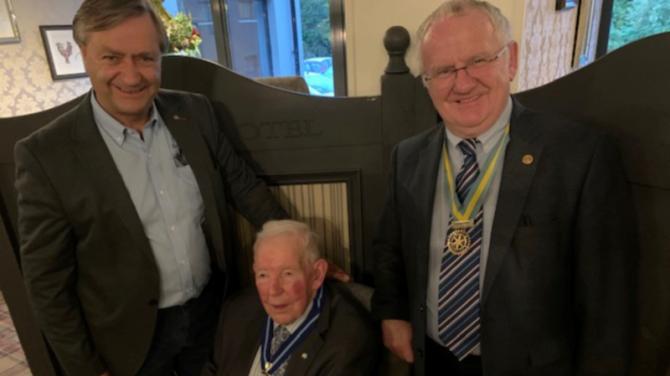 THE Rotary Club of Strabane/Lifford recently held a function in the Fir Trees Hotel, Strabane to celebrate the contributions made to the club and Rotary nationally by one of its members.

Rotarian Sam Martin is the only remaining founding member of the club which was formed in 1968 and, at the right young age of 93, he is still passionate about Rotary and supporting his club.

Sam served as its Presidents for the year 1977-78 and took up the National office as District Governor for the island of Ireland in 1982-83.

While being devoted over the years to community and humanitarian work for the local club and Rotary generally which is commendable in itself, carrying out the office of District Governor demonstrated a level of service that was exceptional.

This was the main reason the local club decided this year to celebrate Sam’s service to the club as it is the 40th anniversary of him holding the office of District Governor.

Rotary run quite a number of formal occasions during a Governorship year and the location of some of these are decided by the Rotarian in office and his associated club.

In the case of Sam Martin, he, and the Rotary club of Strabane-Lifford, chose the Strabane High School at Derry Road as the venue for his District Assembly which they held on Saturday, July 17 1982 which was attended by the executive members of all the Rotary Clubs throughout Ireland. The local Woman’s Institute prepared and served the food for this function.

From, September 30 to October 3 1968 Sam held his District Conference in the Limerick Inn, Limerick which was co-hosted by the Rotary Club of Limerick Shannon.

Sam would like to acknowledge the support he received at the time from Strabane Rotarian, Ricky Craig, who was then the District Secretary.

Sam would also like to pay a special tribute to his deceased wife, Eleanor, for her support and the sacrifices she made that enabled him carry out the duties of District Governor and continue with his work as the local representative of the Ulster Farmer’s Union.

The function concluded with a presentation from St. Columba’s College student Adrienne Gallen who spoke about her experience at the Titanic Building and Northern Ireland Assembly as well as Europe House and the Dail in Dublin which was all part of her prize in winning the Rotary District’s Youth Leadership Development Competition 2022.