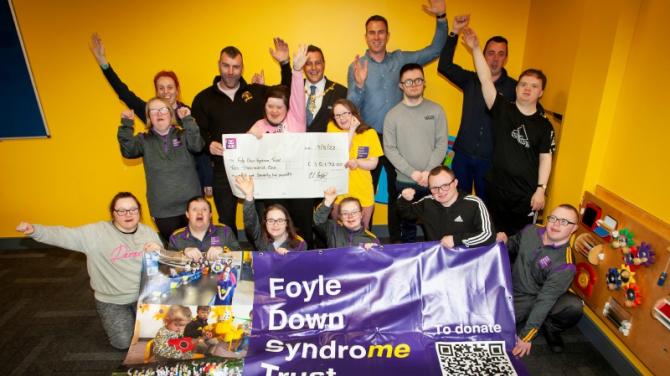 A TWO day tour of the North West featuring some of the finest supercars in Ireland has rasied over £10,000 for charity.

A huge calavcade of cars took part in the hugely successful event which began at Applegreen in Lifford and took in the council area and Donega.

The event allowed the public to get a close up look at the impressive vehicles and raise funds for Mayor Graham Warke's charity for his year in office - the Foyle Down Syndrome Trust.

Speaking at Monday's monthly meeting of Derry City and Strabane District Council, Alderman Warke, said he was overwhelmed at the generosity and kindness of people across the North West.

He also expressed his sincere thanks to everyone who took part, donated money or gave up their time to support it.

"Last weekend we had a fundraiser thorughout the whole North West - the Bear Run.

"A massive total was reached with the cheque handed over today of £10,172.

"I want to thank everybody who took part especially Keith Gamble for organising it and all the drivers there, as well as everybody who supported the event."

He added that he was looking forward to the next big fundraiser the Supercar event taking place in the city centre on May 21 from 12 noon to 3pm where the public can come see an array of modern and classic cars.

Reflecting on the weekend itself, the Mayor continued: "We had a brilliant weekend travelling across the North West in some of the world's best supercars.

"Congratulations to the organisers who put meticulous planning into this event to make sure hundreds of people in our council area and Donegal were able to see these stunning vehicles.

"I want to sincerely thank everyone who supported us over the two days and helped raise funds for Foyle Down Syndrome Trust.

"It is a weekend I will never forget."

View the updates and images from the Bear Run 74 on their Facebook page of the same name.

You can also donate to the Mayor's Charity the Foyle Down Syndrome Trust at: