Mayor hosts reception for Jean in recognition of her charity work 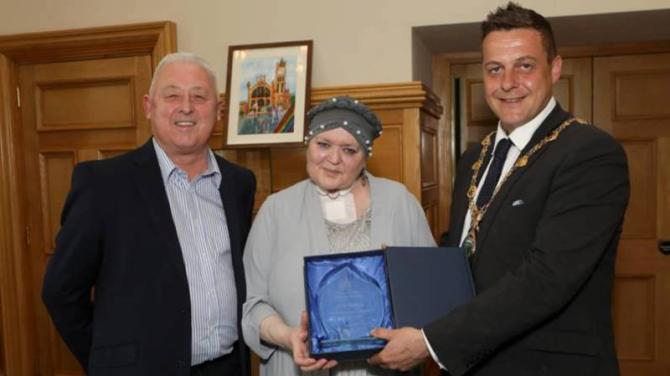 A MAYORAL reception has been held in recognition of a local lady's charitable endeavours.

Mayor of Derry City and Strabane District Council, Alderman Graham Warke, hosted the special event at the Guildhall in honour of Jean Mullen.

The Sion Mills lady is well-known across the district having raised thousands of pounds for various charities thanks to her creative designs.

Her most recent effort resulted in a £200 donation to an event in Clady to raise funds to provide for children fleeing war in Ukraine.

Throughout the pandemic, Jean has also continued with her charity work.

Mayor Warke said he was delighted to host the event in recognition of her generosity.

"It was such a pleasure to welcome the amazing and inspiring Jean Mullen and her family into the Mayor's Parlour for a reception in recognition of her charity work during the COVID-19 pandemic," he said.

"Jean helped so many people during a difficult time for us all."

Strabane independent councillor, Raymond Barr, who proposed the reception was also in attendance.

He said he was delighted to see Jean duly recognised for going above and beyond to help others saying she epitomises community spirit.

"Delighted to see this lady get the recognition she so deserves," he said.    "Despite her own trials and tribulations over the past few years culminating in her own serious illness, she still found time to raise thousands for charities - local and national.

"Her empathy and concern for others stands her apart. She possesses a social conscience, a quality in short supply in the modern world.

"Well done Jean Mullen. A big thank you to the Mayor Graham Warke for accepting my request and for the reception afforded Jean."