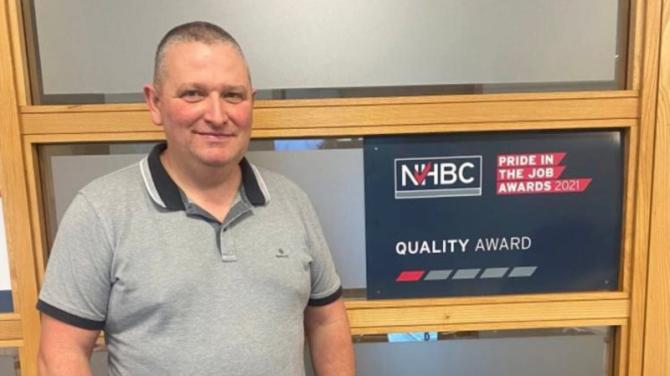 HAVING won both a Quality Award and then going on to achieve a Seal of Excellence certificate in last year’s Pride in the Job competition, Sam Sayers, of S&DS Construction Ltd, was more determined than ever to maintain - and strive to exceed - his high standards as site manager at the Mount Bernard Rise residential development in Castlederg.

His enthusiasm and sound work ethic has certainly paid off. Attending this year’s NHBC Pride in the Job awards dinner at the Culloden Estate and Spa Hotel, Belfast, Sam was over the moon to learn that he had won not only another prestigious Seal of Excellence award, but had also earned a further accolade as Northern Ireland and Isle of Man regional winner in the small builder category of the third round of the NHBC Pride in the Job Awards.

Sam was presented with the much sought-after accolades for house building excellence in front of an audience of sector peers at the annual awards ceremony.

Organised by NHBC, the UK’s leading warranty and insurance provider for new homes, the awards are the most highly regarded in the house building industry.

Thanking all the S&DS Construction employees and subcontractors for their help in making it all possible, Sam said: "The Seal of Excellence is an accolade all site managers want to win, and to achieve that and also be crowned regional winner has been a highlight of my career so far.”

Sam will now go forward to compete for the ultimate prize in house building, a Pride in the Job Supreme Award.

The winners will be unveiled at a gala ceremony in London in January 2022.

In the NHBC Pride in the Job competition, Sam was recognised by judges as being extremely organised, having a keen eye for detail, exceptional cleanliness on site, always willing to take on board feedback to make changes for the better, and building “stunning homes”.

Keen to acknowledge the people around him, Sam added: “I’ve a good core group of men working with me and that’s the main thing, because it’s all teamwork.”

Sam is told often by employees and subcontractors that they are proud to be a part of his team, and is constantly pushing all his employees to grow and enhance their skills on site with his well-known catchphrase “Make It Happen”.

Now director of a thriving business, Sam started working on site as a digger driver at the age of 17 and then moved on to build one-off homes.

In the past five years he has moved into residential developments, building over 25 houses a year.

S&DS Construction Ltd is a family run business with Sam’s wife, Denise, and their Adam, and daughter, Alison, having a role in the company.

S&DS Construction has a number of ongoing developments at the moment, including the phase three development at Mount Bernard Rise, Castlederg; Crevenagh Hall, Omagh and Newtownsaville Road development.

Sam has been overwhelmed by the demand for houses in his local town, with all houses being sold each time another phase is released.

The great news for home buyers is that there is another phase to come in January 2022!