'Charity Angels' raise over £6,000 for three causes close to their hearts 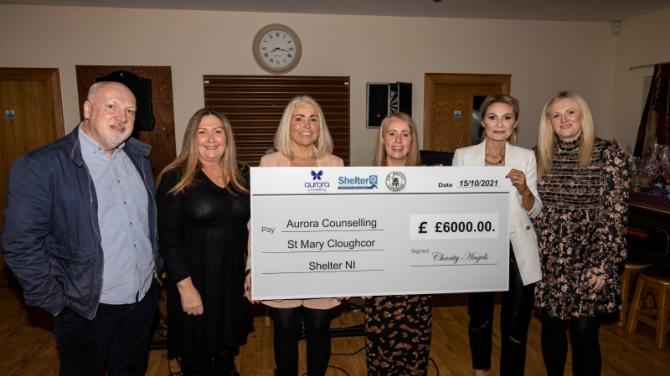 WHEN the Gallagher girls took up running as a way to pass the time during lockdown, they never expected to become would-be marathon runners but fast forward a year-and-a-half later and that's exactly what they are planning.

Not only that, but the trio - sisters Patricia and Noeleen and their sister-in-law Shauna - combined their new found hobby with a fundraising campaign as a way to raise money and awareness for causes close to their hearts.

Now, thanks to a series of events, including a half-marathon and GoFundMe page - under the banner of 'Charity Angels' - they have managed to raise over £6,000 to be divided between St Mary's Primary School, Cloughcor, Aurora Counselling and Shelter NI.

On Friday night, the girls held a quiz night at Burndennett Cricket Club to mark the culmination of their fundraising and to present the cheques to their chosen causes.

Speaking to the Strabane Weekly News on Monday, Patricia, who works as a teaching assistant at St Mary's PS and is also an ex-pupil, said her share of the funding pot will go towards "buying resources for our children to be educated, to buying books for our children to learn to read and to building on their imagination".

Sister Noeleen fundraised in aid of Shelter NI where she has worked 25 years with older and disabled people who find themselves in homes that no longer meet their needs.

Shauna, a psychotherapist and clinical researcher at Queens University Belfast specialising in the treatment of trauma and anxiety disorders with adolescents and adults, works with Aurora Counselling and selected the charity as her benefactor.

Aurora, a not for profit organisation, a provides a safe supportive space where clients can attend to their psychological and emotional wellbeing. and deliver a variety of therapeutic services to adults, teenagers and children, presenting with emotional and mental wellbeing difficulties.

Explaining how the fundraising challenge began, Patricia said: "At the beginning of lockdown, we decided that we would go out running in the morning. We would have got up at 5am and then be out for 5.45am.

"We had never run in our lives before but it was a way to keep fit and get some fresh air as well as having company.

"We would have ran down the Canal at the beginning, and then started training uphill.

"We just kept at it every morning. As the weeks went on, our speed and the distance increased so the talk turned to doing a half marathon."

The idea then became a reality when they enrolled to do the Spar Omagh Virtual Half Marathon, and their fundraising efforts snowballed from there into a year long plan for events in support of the three worthwhile causes.

"We did the half-marathon uphill up by Newtownkennedy Street, around Ballee and Towncastle Road. We said we would do it for charity," Patricia continued.

"We talked about other events that we could do and then we decided we'd do a year long charity fundraiser for the causes that mean so much to each of us.

"We managed the half marathon in August and then we ran 100 miles in September and 50 miles in October.

"We also arranged quizzes, climbed Errigal, Muckish and Knockavoe Mountains. We were mean't to go to do the Camino De Santiago walk in Spain too but with COVID, we couldn't."

While the grand total of their fundraising has yet to be confirmed with some money yet to come in, Patricia says the girls are delighted to have raised over £6,000.

"We are over the moon," she said. "When we started, we never expected to even raise half of that.

"And we can't thank everyone enough who supported us and donated. They have been so kind.

"The support we received was unbelievable, including those who sponsored draw prizes.

"All that money is now going to our three charities who will get over £2,000 each."

The girls now firmly have the 'running bug' and in January they plan to begin training for a full marathon, which they hope to do in May.

"It's been a lovely experience. With the world that we are living in now and with what everyone is going through, it's been amazing to see so much positivity from everybody.

"Looking back at the half-marathon, we still can't believe we did it," Patricia laughed.

"My daughter, Jenny and niece, Jessica, started running with us in January too and they've kept it up so it's a whole family affair and it has been lovely to be able to do it together.

"It brought back such a sense of security during uncertain times, and we'll keep it up!

"We've got the bug and we have so many medals. Whatever we could do, we did.

"We are still running during the week and then have the hill runs at the weekend, so we're aiming for May for the full marathon, all being well.

"Again, on behalf of us all, a massive thank-you to everyone who supported us."