Mahon's Way visits Castlederg in the next episode 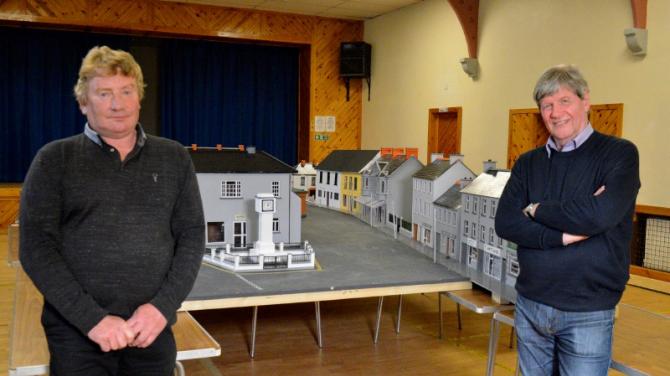 CASTLEDERG and its river, ruins and ‘tiny’ town centre are the focus of the next episode of the popular UTV series 'Mahon’s Way'.

Presenter Joe Mahon, with the help of Castlederg native and now retired dentist, David Young, gives an amazing insight into the history of the old castle, with David charting its 500 year connection to the town.

He recalls as child it being a bit of an assault course to access the castle ruins.

Viewers will also find out about the river beside, and its legendary ‘castle hole’, and also about the grisly finds of an archaeological dig in 1991, and how David used his dentistry skills to assist.

In the second part of the programme, Joe finds out about the Lilliput sized model of old Castlederg town centre.

He’s in Derg Parish Youth Hall, meeting Gordon Speer who shows him the meticulously re-constructed models, all drawn from old photographs of a not quite forgotten Castlederg.

Former councillor James Emery and the Rev Canon Harry Trimble speak to Joe about their involvement in keeping the town’s history alive, combining their efforts over the years to produce three separate volumes of 'Castlederg and its Red River Valley'.

They reminisce with Joe about what life was like in the town, right from World War I, through the 60s, right up to the present day.

And Joe returns to Co Tyrone for the final two episodes of the series with a focus on Fintona on November 29 and December 6.

Mahon’s Way is produced by Westway Film Productions for UTV and is sponsored by ‘Mid & East Antrim - A Place Shaped by Sea & Stone.’

You can watch this episode on Monday, October 25 at 8pm on UTV and on catch up on www.itv.com/utvprogrammes .