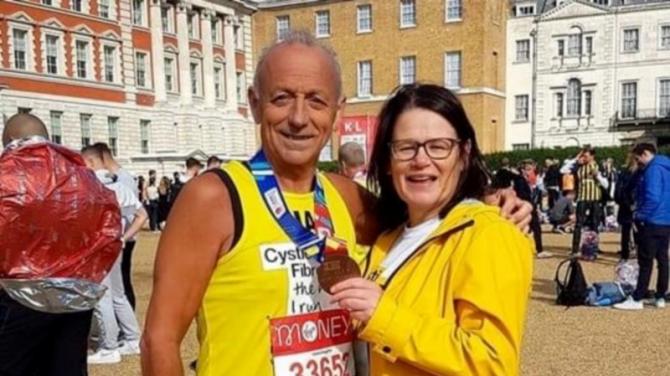 SEVEN weeks ago, Spamount man Liam McHugh had set himself three targets over the course of one weekend: 1. complete another London Marathon; 2. meet the milestone of £300,000 for Cystic Fibrosis research; 3. enjoy his 60th birthday!

The latter of the three would only have been possible, of course, if he achieved the first two on his list.

And it's fair to say Liam had a 60th to remember as not only did he cross the finishing line in London in under four hours, but, more importantly, he smashed his fundraising target!

Liam set off for London on his birthday, Friday, October 1, but to properly celebrate the occasion, Liam had wanted to get over the line with his fundraising target, having been so close to £300,000.

Aided by an anonymous £2,000 donation - believed to be from a generous businessman from London - the notification came through later that day that he had met his desired total.

Free of pressure, Liam could really enjoy the marathon, interacting with the massive crowds en route to helping his friend - another of the 'CF family' - achieve a sub-four-hour marathon.

"It was great fun," said Liam.

"I was able to get involved with the crowd for the first time.

"People were cheering me on, singing happy birthday, and it was lovely. Any other year, you're trying to conserve every ounce of breath and energy you have. But this year, I didn't worry about the time, I just enjoyed chatting and waving to the supporters."

Prior to the race, Liam had received another boost when he visited the CF stall where volunteers presented him with cupcakes and birthday wishes.

As an added bonus, his wife Eleanor had a seat on the main spectator grandstand on The Mall.

"She was sitting in the front row as I crossed the finishing line," beamed Liam.

It was well deserved, as Liam explains: "Eleanor is always on the go for me as she does all the bookwork".

"I just want to thank everyone for all of their generosity and support over the years.

"I keep saying it, all I do is get out and run. It's the public who donate the money... and I couldn't do it without their support.

"When I first started out, I never imagined I would get anywhere near £300,000. The public has always given me the incentive to carry on.

His campaign to improve the lives of people living with Cystic Fibrosis has known no bounds, and thanks to his work - and the generosity of all who have supported him - thousands have benefitted.

And while he will continue to fight for the CF cause, insisting he will not 'forget the 10 per cent' of sufferers whose bodies reject treatment, Liam acknowledges it is time for a break.

"I'm full of aches and pains. My knee is sore, my heel as well, and I have a recurring injury.

"I need to rest now. I need to take things a bit easier. I've been doing this for a long time now, 24/7, and I've sacrificed things like weddings and birthdays and different events.

"I think it's time to try and take a few months to relax. I don't know if I'll do London next year, but I more than likely will. We'll see.

"Normally I'm straight back at it, thinking about what's next, but between now and Christmas, I'll do very little.

"There's no way I will give up on the 10 per cent, however. I will continue to be the ambassador for the CF Trust."