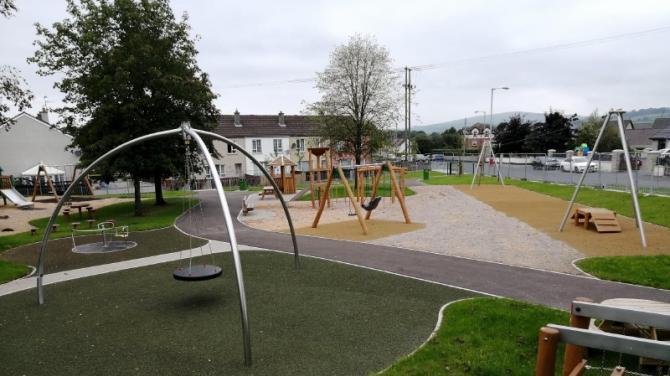 IT'S been a long time coming but children in Sion Mills are delighted to finally have a new recreational facility in the village open and ready for play.

The £318,000 play park in the village, located at Parkside Gardens on Seein Road, opened on Friday.

While a formal ribbon cutting is planned for the coming weeks, over the weekend local families have been making the most of the new play area.

Work on the facility got underway in November last year. It includes equipment to cater for children of all ages and abilities including a wheelchair accessible ground flush roundabout, swings for different ages and abilities, sensory equipment and quiet areas with sound, visual and tactile elements.

There is also a zip line, a pendulum swing, an obstacle course, multi units with towers, climbing nets and slides for different ages.

Set in a natural setting with play equipment located among trees, grass and meadow areas, there is also provision of new footpaths, an upgraded vehicular maintenance entrance, tree and shrub planting, grassing works and park signage.

The village was identified by Derry and Strabane Rural Partnership as a strategic Village Renewal Project, with £195,000 in grant funding set aside for the new park.

The funding is part of the Rural Development Programme funded by DAERA and identified through public consultation and the Cluster Village Plan.

Council also contributed £123,000 to the new facility through their ongoing commitment to play provision.

News of its opening has been greeted with widespread delight, with Sinn Féin councillor, Ruairí McHugh, saying its great to see the park open and being enjoyed by children and their families.

“It is fantastic that the new play area is now open and being enjoyed by children and their families prior to its official opening at a later date.”

"There will be an official opening planned for the weeks ahead.

"Well done to Parkside Residents Group, all involved in getting this over the line including our SDLP reps and activists."