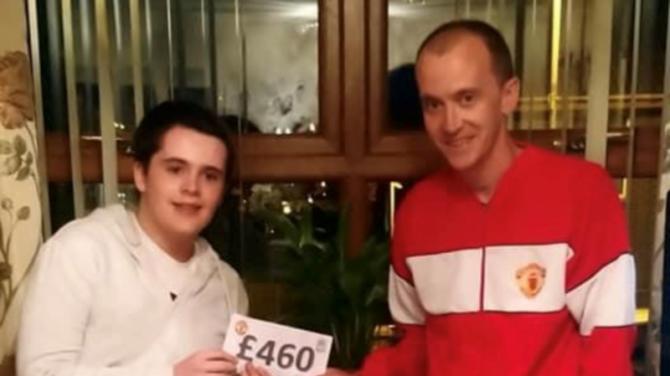 A KIND-hearted Strabane man - who is a super Manchester United fan - has helped raise funds for Hayden's Appeal.

Eamon Cooke was set the ultimate challenge when his young nephew brought home a sweet treat in the form of a Liverpool FC themed pop.

A quick post on Facebook eventually lead to a challenge - with a friend daring the Springhill man to eat the pop for the benefit of charity.

No stranger to charitable endeavours, Eamon reluctantly took up the dare to eat the "disgusting pop" and decided to raise funds for Hayden's Appeal - with one caveat.

He said he would only do the challenge and live stream it if he managed to raise £200.

Donations soon poured in and the Red Devils fan exceeded his target.

True to his word and cheered on by family and friends keen to watch him suffer, Eamon surrounded by his Man United memorabilia and clad in his teams colours, duly completed the challenge.

He explained: "My six-year-old nephew who is a Liverpool fan bought me a Liverpool pop on his travels to Anfield.

"He thought he was being funny as I’m a United fan.

"Well to show the funny side I stuck it on Facebook and as a result I was challenged if I raised £200 for charity, I’d have to eat it.

"So I took up the challenge and posted on Facebook. I said if I reached £200 I will eat the pop on live stream on Facebook with all proceeds going towards Hayden’s Appeal to get the young lad to Turkey for his surgery."

Eamon managed to raise £460 in total and recently presented the money to 12-year-old Hayden Kelly.

The Strabane boy has scoliosis, a condition where the spine develops abnormally and curves excessively in one direction.

Despite Hayden's case being considered urgent due to the severity of the curve, he faced a lengthy wait to be seen on the NHS.

Following months of uncertainty since his diagnosis, his family decided that their only option is to travel abroad to get him the help he needs.

To this end, they embarked on a major fundraising campaign - under the banner of 'Hayden's Appeal' - in a bid to raise the much-need £50,000 to allow Hayden to have the life-changing surgery carried out in Turkey.

As well as a GoFundMe page, Strabane and the wider community came together to raise the funds needed through a number of initiatives, including raffles, music nights, sponsored cycles and many other events, while collection buckets were  placed in local shops.

Hayden and his family will leave today (Wednesday) to begin the journey to Turkey for the surgery and his family say they are overwhelmed and so grateful for the support they have received.