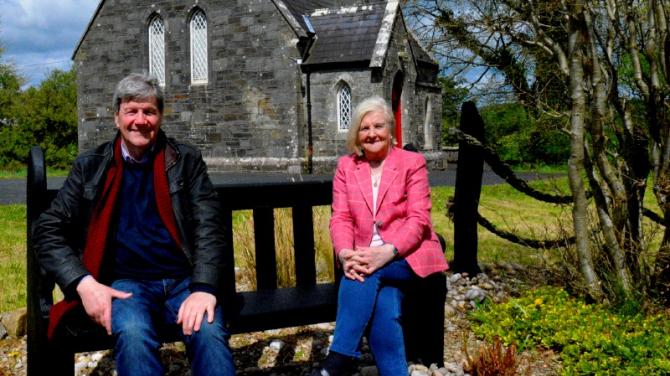 JOE Mahon finds himself in Killeter in West Tyrone in the next episode of the popular UTV series 'Mahon’s Way'.

On Monday night, September 6, Joe is in the townland of Termonamongan and learn of its links with Rev William Alexander, who would go on to become Primate of All Ireland.

Religion and religious worship is embedded in all the townland names, and with the help of local historians Eamon Dolan and Danny Gallen, he finds a well that according to tradition, St Patrick blessed as he passed through the townland of Magerakeel.

Joe talks to Sadie McSorley about Mellon’s Glen which was lovingly restored after years of neglect as part of a Millennium project.

She tells Joe of the origins of the Mass Rock in the Glen, and reveals that an ancient cross on the site might not be as ancient as Joe thinks!

Sadie also tells Joe of her brother’s dare-devil antics on the Killeter Bridge which landed him in big trouble with their father.

Joe then turns his attention the wife of Rev William Alexander, the well know hymnist Cecil Frances Alexander, and with the help of local woman Eva Baxter, learns how she shunned any spotlight and fame from selling her hymnbooks, preferring to help the sick and needy of all religions instead.

In the second part of the programme Joe meets Jim and Sarah Falls, who are the owners and custodians of Essen Cottage, which was formerly owned by three local brothers, the McHughs.

They are keen to preserve its history and have spent the last 20 years restoring it to its original glory, furnished with many artefacts, devices and contraptions of that bygone era.

Jim and Sarah both share with Joe the stories behind many of the house’s features.

Mahon’s Way is produced by Westway Film Productions for UTV and is sponsored by ‘Mid & East Antrim – A Place Shaped by Sea & Stone.’

You can watch this episode on Monday at 8pm on UTV and on catch up on www.itv.com/utvprogrammes .