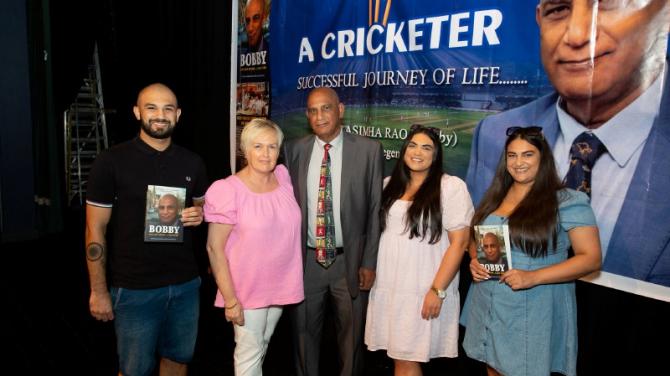 A BOOK chronicling the life of cricketer and community worker Bobby Rao has received its official launch.

The ribbon was cut on 'India and Ireland...A Love Story' during a ceremony in St Pat's Hall, Strabane.

Among the speakers were former MLA Michaela Boyle, chair of the North West Cricket Union Brian Dougherty and the book's author, Conor Sharkey.

The speeches were preceded by a minute's silence in honour of three people close to Bobby who have died in recent months – his brother and mentor Ranganath, Rao, Strabane Ethnic Community Association committee member, Bozena Rojkowicz and former Ireland cricket coach, Mike Hendrick.

Paying tribute to Bobby, councillor Michaela Boyle described the contribution he has made to society since moving to Ireland permanently in 1989 as immeasurable.

She also referred to the strong bond that grew up between Bobby and the late Martin McGuinness during the former's time on Stormont's Ethnic Minority All-Party Working Group.

Similarly Brian Dougherty said Bobby Rao had helped shape the path of international cricket in Ireland through his coaching of stars such as Boyd Rankin, William Porterfield and many others who have gone on to achieve Test status.

'India and Ireland...A Love Story' was more than two years in the making and traces Bobby's journey from a young boy with a dream in Hyderabad to the pinnacle of cricket in India.

It also examines in detail his time in Ireland, from starting out as a professional with Strabane to his hugely successful link-up with Mike 'Hendo' Hendrick.

In an emotional address Bobby recalled his close friend as well as Bozena Rojkowicz who lost her battle with illness only last month.

He also paid a heartfelt tribute to his late brother Ranganath, the man he credits with guiding him to the sporting riches he has enjoyed over the past five decades.

Conor Sharkey said that while releasing a book during a global pandemic was far from ideal, it had nonetheless been an honour to work with Bobby on his memoirs.

“I've been asked many times over the past ten months why we decided to publish a book during a global pandemic and it's a fair question,” said the journalist.

“You've already heard about some of the people we've lost, both Bobby's brother and Mike Hendrick who contributed directly to the book.

“But as well as Ranganath and Mike, in the past year we lost Kelly Rhodes, the former Uppermill player who I interviewed and who remembered Bobby with a great fondness.

“Others too who feature in the book – Bob Willis, Yashpal Sharma – have passed away since the start of our project. So when people ask why we wrote and published a book during a pandemic, that is why, to get those voices on the record before it was too late.

“From a personal point of view writing Bobby's book was a fantastic experience and it gives me great heart that he and his family are happy with the end product.

“I trust it does service to a life lived to the full and to a man who has given so much to society both in his native India and here in his adopted home of Ireland.”

Copies of 'India and Ireland...A Love Story' are still available from various local shops and from the office of Strabane Ethnic Community Association.

Copies can also be purchased online from amazon.co.uk.