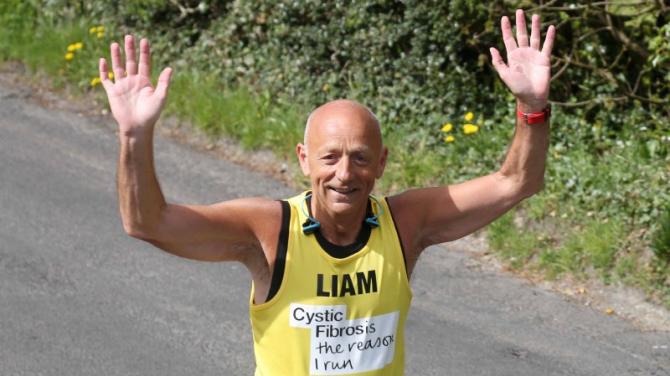 WE may be still in the midst of a global pandemic but that hasn't hampered the fundraising campaign of the tireless Liam McHugh, who is closing in on a scarcely believable £300,000 total for Cystic Fibrosis (CF) research.

To once again underline the generosity of the local community, the Spamount man's fundraising efforts have raised close to £60,000 over the last 12 months, in spite of all that is going on in the world.

That has taken his total to approximately £293,000 - and although Liam's fantastic work has helped to change the lives of thousands of people across Northern Ireland, he is far from finished.

Last week marked one year since the 'life-changing' Kaftrio drug was finally licensed by the European Commission. The drug is said to provide treatment to 90 per cent of cystic fibrosis patients in NI.

But Liam is determined to keep fighting for the other 10 per cent who, very sadly, cannot benefit from Kaftrio.

And with that in mind, he is preparing to take on the London Marathon on October 3 - on the same weekend he will mark his 60th birthday.

Last year, due to COVID-19, the London Marathon was cancelled, so Liam took to the streets of his home village of Spamount to complete the 'virtual' 26.2-mile challenge.

He admits that he cannot wait to return to the buzz of the real thing where thousands line the street of the English capital to cheer each and every participant on.

"I'm hoping for a treble celebration: to reach £300,000, complete the London Marathon and mark my 60th birthday all on the same weekend," said Liam.

"That's the goal. I have that many aches and pains, but I want to do this for everyone in the CF community.

"The number of people who have written to me to tell me how Kaftrio has transformed their life is overwhelming.

"But on the flip side of that, I also receive messages from people within the 10 per cent that can't make use of Kaftrio, and they thank me for continuing to campaign. They keep me motivated to continue."

Charities across the world have been severely affected by the pandemic, including the CF Trust, where Liam is an ambassador.

The funds he raises help go towards ground-breaking research for new treatments.

"CF Trust still needs funds to continue help families," he continued. "Some people think that my work is finished, and although the new drugs are the biggest thing to have ever happened the CF community here, I will not forget about that 10 per cent.

"There are over 1,800 mutations of the strain of Cystic Fibrosis, so it is obvious drugs are going to affect everyone differently. Sadly, that's why there is 10 per cent of sufferers who are still without the right treatment."

"It is something I would never have expected in my lifetime," he said. "At almost 60 years of age, I can say I have played my part in the fight against CF, and it's all been so worthwhile.

It has been one heck of a journey for Liam, who began his fundraising campaign back in 1993, shortly after the birth of his daughter Rachel, who has CF.

"We all headed up to Belfast on two coaches to take part in the relay race, and we raised £3,500. That was a colossal amount of money back then. I thought it was a one-off.

"Never in my wildest dreams did I believe all that followed was possible. Looking back, that kickstarted the whole thing, and £3,500 has almost turned into £300,000."

To donate to Liam's cause, visit www.justgiving.com/