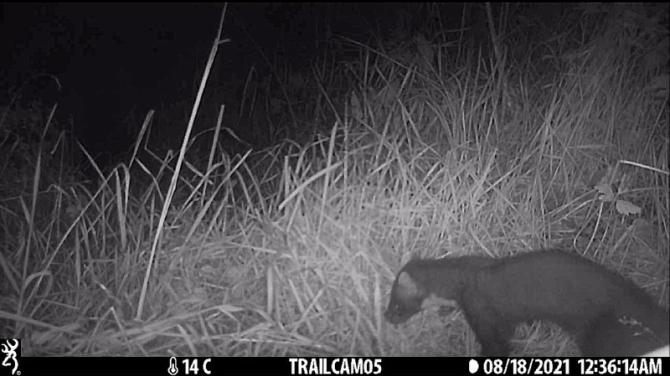 THERE was a special wildlife sighting near Strabane last week as, using wildlife cameras and a bit of detective work, the youngest members of the Riverine Environmental Project managed to record the notoriously elusive pine marten.

Off the beaten track, seven-year-old Josh Cairns spotted an animal track in the undergrowth and decided to place the camera.

When he returned 48 hours later, he was delighted to see that the camera had recorded something.

At first it was difficult to tell what the creature was on the camera's small screen, but after re-watching many times, another one of the project's young members suggested that it could be the elusive Pine Marten.

It was not until the footage was downloaded onto a computer that it was possible to make a positive identification.

A member of the weasel family, Pine Marten lives in wooded areas and feed on small rodents, birds, insects and fruit.

They were thought to be all but extinct from Ireland by 1900 due to habitat loss and being hunted for their fur, but over the past few decades their population seems to be recovering and spreading across the country from a few pockets in County Down and Fermanagh.

Although, Pine Martens have been spotted in the Strabane area before, this is thought to be the first recording.

Every Pine Marten is chestnut brown in colour, but each has a uniquely shaped bib - a pale yellow section of fur on its chin and throat - which makes it possible to identify and record each individual.

"Through education and exploration, we have really seen the participants really connect with their surroundings. Our wildlife cameras have given us a glimpse of a hidden world that would not be possible to see without this technology."

Project deliverer, Noelle Donnell from Hummingbird (NI) added: "We have a lovely group of young participants who are passionate and excited about our local biodiversity and everyone, young and older, are learning from each other along the way."

Managed by Derry City and Strabane District Council and delivered by Hummingbird NI (CIC) and Dennett Anglers, this project is funded by the European Union's PEACE IV Programme, managed by the Special EU Programmes Body (SEUPB).