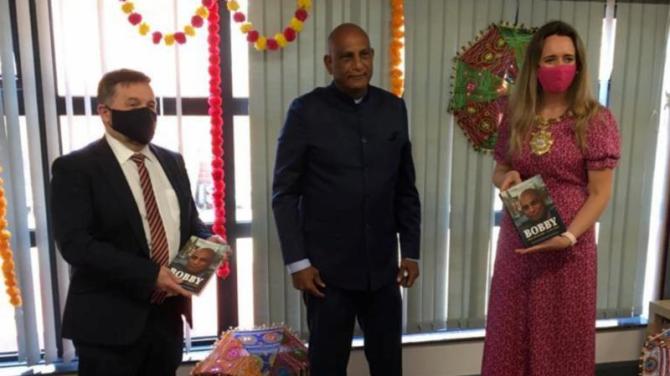 NORTHERN Ireland's Indian community has paid tribute to the country's Health Minister for the assistance he provided as COVID wreaked havoc on their home nation.

Aid, including three oxygen generators, sent from Northern Ireland is estimated to have helped save more than 1,000 lives.

Health Minister Robin Swann was speaking in Sandy Row Community Centre at a lunch organised by ImageNation NI, an Indian group which seeks to develop relationships in Northern Ireland.

"It was our moral duty to do what we could to help,” Robin Swann told those gathered.“When I stood on the runway at Aldergrove that night in early May and watched the massive cargo plane leave our shores I felt a mixture of pride and hope as a result of the fact that we in this small country were able to provide support to our friends across the globe in the world’s most populace democracy.

"It has already been reported that the oxygen supplied by the three generation units that we sent over has helped save more than 1,000 lives.

"I hope this equipment can continue to help ease the pressures being experienced in India.”

Among those invited to speak at the lunch was former Indian Test cricket star and founder of Strabane Ethnic Community Association, Narasimha 'Bobby' Rao.

He spoke of how, in geographical terms, Northern Ireland is only a mere patch compared to the physical vastness of India.

But as COVID-19 took hold, that patch grew to become a comfort blanket for the many Indian people in need of help.

“Your donations of oxygen generators and consignments of aid became vital to a nation battling this terrible virus,” Mr Rao said.

“The love and compassion you have shown during these dark times has shrouded my country and made India realise that it is not alone, that others truly care.

“I salute you and the people of Northern Ireland for the generosity you have shown and as an Indian who proudly calls Northern Ireland home I will never ever forget how you stood up when my country needed you.

“From the bottom of my heart, on behalf of all the Indians living in Northern Ireland, I thank you dearly.”

Sanjay Ghosh is head of ImageNation NI. The Mumbai man said it was a pleasure to be able to thank the Health Minister in person.

“It was an opportunity for us to say thank you to Northern Ireland and to express our gratitude,” Mr Ghosh said.

“It was a proud moment for us too because Northern Ireland is a country of just 1.8 million people. We never expected anything like this but it says to us that we are part of the community here and we matter.”