The Lost Childhood Exhibition launches at the Alley 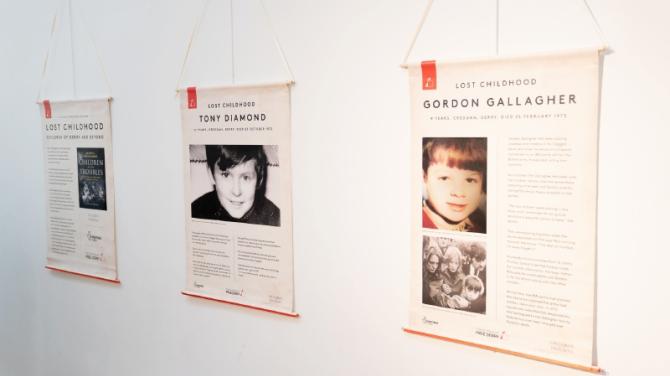 AN emotional exhibition capturing the stories of 20 local children whose lives were tragically lost during the Troubles has opened at the Alley Theatre.

The Museum of Free Derry has launched the Lost Childhood exhibition which will be on display in the local theatre until July 16.

Over 3,700 people lost their lives during the conflict here and 186 of those were children killed before they reached their 17th birthday.

The stories of all of these child victims have been highlighted in the recent award-winning book 'Children of the Troubles' by Joe Duffy and Freya McClements (Hachette Books 2019).

Inspired by this important work, the Museum of Free Derry has produced the Lost Childhood exhibition.

First displayed in January 2020, this emotive exhibition tells the stories of 20 of those children, all from the Derry City and Strabane District Council area.

Each individual story tells of how the child died and of how their families coped with such a traumatic loss.

Each is a story of immense pain and suffering and in many cases of an ongoing struggle to get acknowledgement of the truth of what happened.

Mayor of Derry and Strabane, Alderman Graham Warke, visited the Alley Theatre to launch the exhibition on Friday where he viewed some of the personal artefacts on display.

Speaking afterwards, he encouraged local people to take the opportunity to view the exhibition which captures an important chapter in local history.

"I was deeply moved by the Lost Childhood collection which has been so sensitively and respectfully curated by the Museum of Free Derry," he said.

"There are no words to convey the impact the loss of a child has on a family, but this exhibition has a very important message and effectively and poignantly recalls the stories of loss and suffering from this tragic chapter in our history.

"It's so important that we remember these lost children and that we honour their memory by continuing on the path to peace and reconciliation."

A spokesperson for the The Museum of Free Derry said: "We would like to thank all of those who helped with this exhibition, who allowed us to share their memories, their photographs and their treasured personal items, and also the Alley Theatre and Derry City and Strabane District Council for hosting the exhibition."

Admission to the exhibition is free and it is open to the public Monday to Friday (excluding bank holidays) from 10am to 4.30pm.

For more information contact the Alley Theatre on 028 71384444 or online www.alley-theatre.com.